Human remains found in Rosedale construction dumpster are that of a little girl, police say

Human remains found in a construction dumpster outside a vacant Rosedale home earlier this week are that of a little girl as young as four years old, police say.

The remains were located in a dumpster outside a home on Dale Avenue north of Castle Frank Station late Monday afternoon.

Police say an autopsy has now confirmed the remains belong to a girl who was likely between the ages of four and seven.

Investigators believe that the remains were left in the dumpster sometime between 12 p.m. on Thursday and 4:45 p.m. on Monday.

Police, however, say the girl may have been deceased as of last summer, or perhaps even earlier.

“We have the best investigators in the Toronto Police Service working this case with everything they've got and so we will identify this little girl and we will be doing all the work that we can for her,” Insp. Hank Idsinga told reporters during a news conference on Thursday morning.

Police haven’t formally classified the girl’s death as a homicide at this point but Idsinga said that detectives with the homicide unit are actively involved in the investigation with the understanding that “kids don’t just die.”

He said as part of the investigation officers are looking back on old missing persons reports and have identified “a couple which come close” but none that investigators have narrowed in on at this point.

He also said members of the Toronto Police Service’s forensic video analysis unit are examining footage from a number of cameras on the street, though he acknowledged that police have not found any video which directly shows the dumpster where the little girl was found. 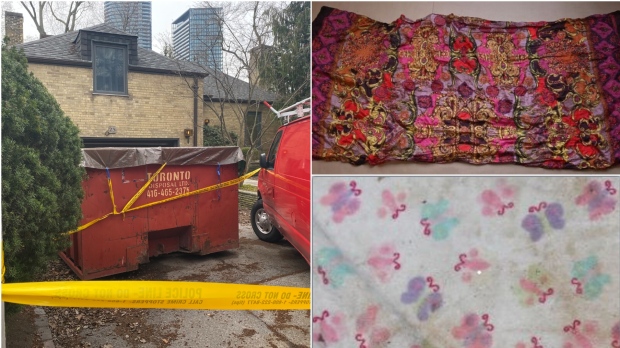 No cause of death determined

Police were not able to determine a cause of death through the autopsy.

Idsinga said that the remains will undergo additional testing by Ontario’s Forensic Pathology Service, which could “tighten down” the timeline of when the girl died a little more.

“Yesterday during the post-mortem was when we got the first general idea of the size of this child and the approximate age. It's still fairly new information. We literally got that information at about 6 p.m. last night and I've been digging through it since then,” he said. “You know, sadly, we've seen it before (bodies being disposed of after the fact). But I don't recall myself personally any cases where the pathologist has had to rely on the entomology process to age the time of death of a victim and so it's a very unusual circumstance that we're dealing with right now.”

The girl is described as Black, of African or mixed African descent. She was about three-foot-six, with a thin build and black curly hair that was in four short ponytails, two of which were braided and secured with black and blue elastic bands.

Her remains were wrapped in a crochet blanket inside a plastic bag. That bag was wrapped in a coloured blanket. Police have released an image of that blanket in the hopes of triggering someone’s memory.

“Our first priority right now is to figure out who this little girl is,” he told reporters. 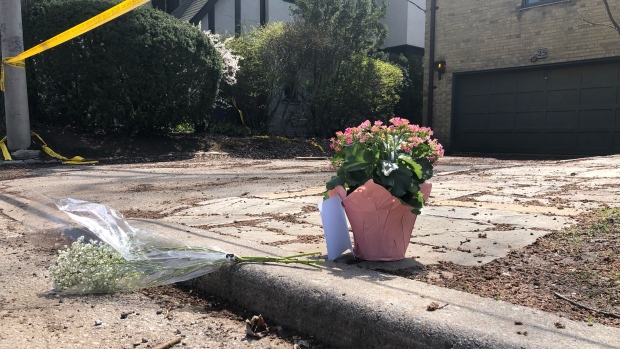 On Thursday there was a growing memorial outside the Dale Avenue home where the girl was found. Several bouquets of flowers were left beside police tape that remained up, as well as a card reading “Little one, we pray heaven has dried your tears.”

Mayor John Tory also commented on the girl’s death while speaking with reporters at a news conference later on Thursday morning, calling it “an unspeakable tragedy.”

“I have grandchildren in this age bracket. They say this little girl is between four and seven years old. There’s talk of little ponytails just like my grandchildren have so you know, my heart was broken when I read this and talked to the police about it,” he said. “All I can say is that my heart goes out to that child. No child, no person should ever end up in a circumstance like that.”

Police tape surrounds a Toronto house on Thursday May 5, 2022 where the wrapped body of a young girl was found in a construction-site dumpster bin. THE CANADIAN PRESS/Frank Gunn Frank Gunn