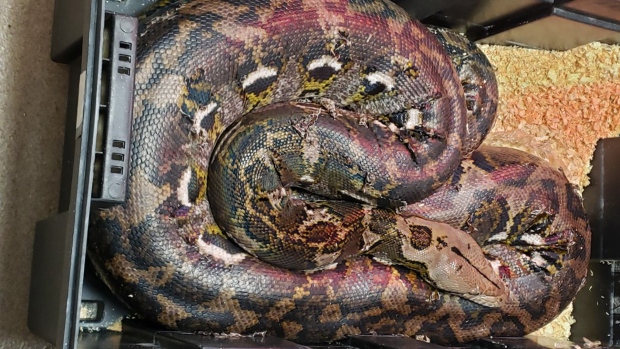 A reticulated python found on the lawn of a business in an industrial area in Thorold Wednesday August 21, 2019 is pictured. (Handout /Lincoln County Humane Society)

A large python is in the care of the Lincoln County Humane Society after being found on the lawn of a business in Thorold, near St. Catharines.

Niagara Regional Police and the humane society were called to a business in an industrial area Wednesday night after the snake was spotted.

When they arrived, officers found a 14-foot long (4.3 metres) reticulated python weighing approximately 80 pounds, loose on the lawn of a business.

Officials are trying to find out who owns the snake and how it came to be on the lawn.

According to the humane society, the snake is expressly prohibited and was not registered with the municipality.

“We are glad that this snake was quickly caught without incident” Lincoln County Humane Society Executive Director Kevin Strooband said in a statement. “This particular snake is capable of harming someone with its bite, if it were cornered.”

The snake, which is estimated to be between 10 and 15 years old, is being cared for by the humane society until a new home is found for it.

At approx. 9:30pm on August 21, @NRPS1District uniform officers were called to the area of Industrial Drive and Ormond Street South in the City of Thorold over the report of a large snake.

A reticulated python found on the lawn of a business in an industrial area in Thorold Wednesday August 21, 2019 is pictured. (Handout /Lincoln County Humane Society)