‘I think of the victims’ families every day’: TTC cop on year anniversary of van attack

One year after he rushed to assist people senselessly run down along a stretch of Yonge Street in North York, TTC special constable Bill Perivolaris says he still thinks about the families of the ones nobody could save.

“I think of the victims’ families every day. This incident will not go away for them,” he told CP24 Tuesday, recounting his and partner Angela Johnton’s first moments at the scene on April 23, 2018.

The pair heard a frantic red alarm call from a bus in the area of Yonge Street near Mel Lastman Square, and they rushed to the scene from Sheppard-Yonge Station.

“There were bodies all over the place – we deployed ourselves – we positioned our vehicle on the street. We thought there would be a secondary attack,” he said.

[IN PHOTOS: Toronto marks one year since van attack]

Perivolaris said he and Johnston began rendering first aid to injured people, when he turned to walk south, and realized the scope of the tragedy.

“I realized this was bigger than I could handle.”

Ambulances and police started to arrive at the scene to transport the injured to hospital.

Johnston said she began to interview a key witness to the assault while Perivolaris started to tape off areas of what would become a gigantic crime scene.

The scene was so large; the pair eventually ran out of tape.

But as they attempted to cordon off areas and encouraged bystanders to go home, something wonderful happened, Johnston said. Witnesses insisted on staying to help the injured.

“It really surprised me at how many citizens came toward the scene to try to help instead of moving away, that’s what surprised me the most.”

It’s that spirit Mayor John Tory said he wants everyone to think about as they remember the 10 people who lost their lives and 16 others who were seriously hurt that day.

“You started to hear the heroism of both first responders and I will call it ‘public first responders,’ people who stepped up to do such amazing things, not surprisingly in this city,” Tory said.

But as he stood in an emergency response centre that afternoon, lamenting the fact that so many had died, Tory said he also recalled feeling that the city he was elected to lead had lost some measure of its innocence.

A moment of silence was held today at 1 p.m. at Olive Square and a ceremony was moved to inside North York Civic Centre after rain and lightning forced attendees at Mel Lastman Square indoors before 2 p.m.

“We stand side by side today with the families of those we lost a year ago and indeed a community that indeed was shaken,” Toronto Fire Chaplain Hugh Donnelly said during the memorial. “We side by side today as a symbol of the solidarity we have experienced as a city, as a province, as a country together with many people from across the world who have shared in our grief.”

A woman who lost both of her legs in the attack, Beverly Smith, stopped by Olive Square earlier this morning.

“I live right nearby and I just wanted to be here with my family. It’s like a community; Toronto has become a community for us.”

Trauma care counsellors and therapy dogs have been at both locations since 9 a.m. Tuesday, with passersby encouraged to stop and take a moment, write a chalk message on the sidewalk or stay around for musical performances expected in the afternoon.

One handler of a St. John’s Ambulance therapy dog, Alison, attended the memorial and said being at Tuesday’s memorial was a way to “reclaim the space” after a horrible tragedy.

“We were here in the aftermath last year, and it’s just important to be here and do anything we can. (The dogs) do a good job and they help people and last year in particular they helped people reclaim their space.”

A second vigil prompted the closure of Yonge Street between Park Home Avenue and North York Boulevard until 7 p.m. Tuesday.

Alek Minassian, the man accused of driving the van into pedestrians that day remains behind bars, pending a trial in Feb. 2020 on 10 counts of first-degree murder and 16 counts of attempted murder.

Speaking on Tuesday, police Chief Mark Saunders said the emergency services executed a complex plan to respond to the van attack, a plan that has evolved with the lessons they learned that day.

During major public events since, roadways leading to groups of assembled people have been blocked with garbage or cement trucks. At times, officers armed with rifles have been seen patrolling public gatherings.

But Saunders says it’s not his aim to turn Toronto into “security city,” and many of the measures he has enacted are meant not to draw public attention.

Tory said that standing in an emergency control centre that day “felt like I was in a television program at certain points in time.”

“If people understood the step by step, methodical, professional calm way in the midst of unbelievably horrific circumstances, that that plan was unfolded, I think it helped us to stay safe. And I want people to understand on this day that the same approach, it’s subtle, it’s not seen necessarily but it’s there, is being taken to make sure people continue to be safe in this city.”

Police are seen near a damaged van in Toronto after a van mounted a sidewalk crashing into a number of pedestrians on Monday, April 23, 2018. THE CANADIAN PRESS/Aaron Vincent Elkaim 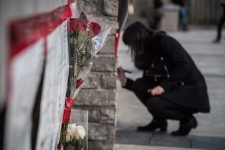 People deliver flowers and write their condolences on a memorial to the victims after a van hit a number of pedestrians on Yonge Street and Finch in Toronto on Monday, April 23, 2018. Ten people died and 15 others were injured when a van mounted a sidewalk and struck multiple pedestrians along a stretch of one of Toronto's busiest streets. THE CANADIAN PRESS/Aaron Vincent Elkaim

A member of Toronto's Ahmadiyya Muslim community leaves a flower at a memorial on Yonge Street the day after a driver drove a rented van down sidewalks Monday afternoon, striking pedestrians in his path in Toronto, Tuesday, April 24, 2018. THE CANADIAN PRESS/Galit Rodan