Incentive program may alter the economics of Ebola vaccines 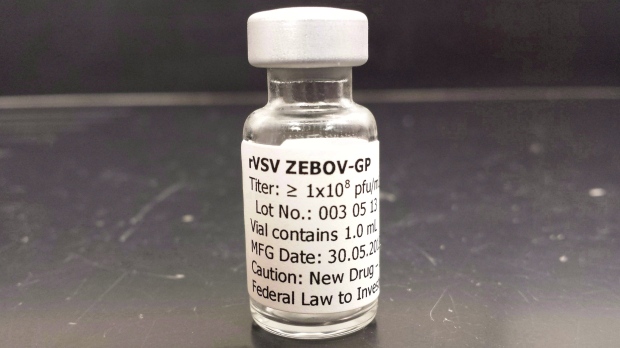 A vial of the Canadian-made Ebola vaccine VSV-ZEBOV, is pictured in a recent photo. THE CANADIAN PRESS/HO, Walter Reed Army Institute of Research - Col. Shon Remich

TORONTO -- Earlier this week, U.S. President Barack Obama signed into law a little piece of legislation that may significantly change the economics of making drugs or vaccines to protect against Ebola and other viruses in its deadly family.

And it might at some point provide a tidy windfall for Merck, the company now developing an Ebola vaccine designed at Canada's National Microbiology Laboratory in Winnipeg.

The bill -- S.2917, also known as "Adding Ebola to the FDA Priority Review Voucher Program Act" -- dangles a sizable carrot meant to entice pharmaceutical companies into developing vaccines and therapies to prevent or cure infection with the virus and other related pathogens in the filovirus family.

Companies that manage to license an Ebola therapeutic in the United States are now eligible for a priority review voucher from the Food and Drug Administration -- which is in effect a promise from the agency that it will swiftly process a future drug or vaccine approval application.

In late November, Merck bought the licence to develop the Winnipeg Ebola vaccine for $50 million from NewLink Genetics, which acquired it in 2010 for $205,000. A priority review voucher would likely be worth more than double Merck's outlay, say those watching the program to see if it leads to the advances it is meant to inspire.

"If they get a priority review voucher, they could totally get more than that," says Judit Rius Sanjuan of Medecins Sans Frontieres -- also known as Doctors' Without Borders.

"If they get a vaccine and they register the vaccine with the FDA, they could get much more than that."

A priority review voucher guarantees that the FDA will fast-track a decision on a licensing application for a drug or vaccine, processing it within six months. The voucher doesn't assure approval; that has to be earned with safety and efficacy data.

But a product that does receive expedited approval gains more time on the market while under patent protection, which has enormous value. Likewise, for a manufacturer who knows a competitor has a similar product in the pipeline, getting into the pharmacies first could mean spectacular earnings.

"The monetary gains could be huge. Much more than $125 million," says Rius Sanjuan, who is the U.S. manager and legal policy adviser for MSF's access campaign, which pushes for the development of drugs needed by low income countries, at prices those countries can afford.

Priority review vouchers are an incentive scheme the U.S. government created in 2007 to encourage pharmaceutical companies to develop weapons with which to fight diseases that wouldn't normally attract the interest of the industry. To date it is believed only four have been issued; of those four, two have been sold. (The first went for $67.5 million in July of this year.)

The diseases covered by the program include some rare conditions that affect children and a number of what are often called neglected tropical diseases -- things like leprosy, malaria and schistosomiasis, which is an infection caused by parasitic worms.

The neglected diseases are conditions that plague the world's poor, who have no capacity to pay for expensive therapies. Developing new drugs or vaccines costs billions of dollars; if those costs can't be recouped through sales, pharmaceutical companies steer clear.

This program is meant to alter those economics.

"It's kind of an interesting concept," says Rachel Cohen, regional executive director for North American for the Drugs for Neglected Diseases Initiative, also known as DNDi.

"It rewards companies or at least in theory it's supposed to reward companies for investing into neglected disease research by offering a voucher that can be used to fast-track approval of a drug that is actually of commercial value to the company."

Cohen said "at least in theory" because her group and MSF have concerns about the way the program has worked so far. Priority review vouchers have been awarded for drugs that have been on the market for some time -- a sort of retrospective reward. And the program doesn't require the company that gets the voucher to actually sell the drug, which critics see as a major design flaw.

It also doesn't stipulate that the company that earns the voucher must have conducted and funded the innovative science itself. Cohen and Rius Sanjuan point to Knight Therapeutics as a case in point. The company acquired the licence for a drug called miltefosine, which is used to treat a nasty parasitic disease called leishmaniasis.

Knight didn't develop the drug or do the research to show it was effective against leishmaniasis. The latter was done by the World Health Organization with some private and public partners. Knight took miltefosine through the FDA approval process, which company CFO Jeffrey Kadanoff says cost about $10 million.

"I think that selling the voucher for $125 million creates an incentive for more companies to do R & D" -- research and development -- "for neglected tropical diseases. So I absolutely think this is a benefit overall," he says.

Rius Sanjuan wanted the bill Obama just signed to fix some of the shortfalls of the program. But she doesn't object to adding Ebola and other filoviruses to the list of diseases in the voucher program. They fit.

The lack of market potential has long been the roadblock for Ebola drugs and vaccines. Outbreaks are sporadic, and until this year, involve scores and sometimes a few hundred people at a time. The outbreaks occur in some of the world's poorest countries, and there has never been any hope that a pharmaceutical company could make back the cost of developing an Ebola therapeutic.

Consequently most of the research on experimental Ebola products has been funded by governments, the U.S. government in the main.

Merck declined to do an interview about the addition of Ebola to the priority review voucher system. But a spokesperson for the company, Pamela Eisele, says the voucher program was not the reason the company acquired the licence for the Canadian Ebola vaccine. "The reason Merck got involved was to apply our experience and expertise to address an important and urgent public health crisis."

Interestingly, the licence Merck acquired in November may actually put it in a position to earn more than one priority review voucher.

The company did not just buy the licence for a vaccine to protect against Ebola Zaire, the subtype of the virus responsible for the current outbreak in West Africa. It bought the rights to a vaccine platform which could be used to make vaccines to protect against other dangerous viruses.

If Merck goes on to develop and licence a vaccine that protects against multiple subtypes of Ebola, that vaccine too could qualify for a priority review voucher. So could a vaccine to protect against the Marburg virus, another member of the filovirus family.

Still, none of this is a sure thing. The vaccine may not work as well in people as it does in primates. It may never make it through the regulatory approvals process. Large studies in West Africa that should begin early in the new year should make it clear which way this situation will go.