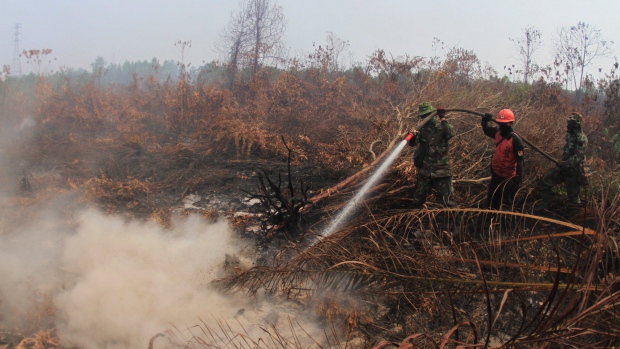 Indonesia's president travelled to the area hardest hit by forest fires, as neighbouring countries urged his government to do more to tackle the blazes that have spread a thick, noxious haze around Southeast Asia.

President Joko Widodo flew to Riau province, where nearly 50,000 hectares (123,500 acres) have burned, to encourage authorities to get the haze under control.

Widodo told reporters Tuesday in the provincial capital, Pekanbaru, that about 5,600 additional military personnel have been deployed to help the 9,000 people currently fighting the fires, which have razed more than 328,700 hectares (812,000 acres) of land nationwide.

He said at least 52 helicopters have dropped more than 263 million litres (69.5 million gallons) of water and 164 tons of salt for cloud seeding as part of the firefighting efforts in six provinces that have declared states of emergency. The provinces have a combined population of more than 23 million.

“All efforts have been made, with more personnel on the ground to battle the fires,” Widodo said, “But the most important measure is prevention before fires occur.”

Widodo regretted that local authorities have been slow in detecting and responding to fires before they start to grow.

“We have all the resources, but all of them were not activated properly,” he said.

He urged people to refrain from setting fires on peatlands or in forests that could trigger wildfires, and ordered authorities take firm action against arsonists, both company employees and villagers.

She said authorities have sealed off at least 49 companies in the past week for investigation, including a Singaporean-based company and four firms affiliated with a Malaysian palm oil corporate group.

Police have arrested 185 people suspected of starting forest fires. They could be prosecuted under an environmental protection law that allows up to 10 years in prison for setting fires to clear land, national police spokesman Dedi Prasetyo said.

Nearly every year, Indonesian forest fires spread health-damaging haze across the country and into neighbouring Malaysia and Singapore. The fires are often started by smallholders and plantation owners who set land on fire as a cheap way of clearing it for new planting.

Many areas of Indonesia are prone to rapid burning because of the draining of swampy peatland forests for pulp wood and palm oil plantations.

Poor visibility caused by smoke caused flight delays at several airports in Indonesia and Malaysia, and prompted authorities to shut schools in some parts of both countries.

The Indonesian Disaster Mitigation Agency detected 2,153 hotspots across the country on Monday, more than half of which were in the six provinces of Riau, Jambi, South Sumatra, West Kalimantan, South Kalimantan and Central Kalimantan. The provinces have a combined population of more than 23 million.

It said 99% of the hotspots were caused by deliberately set fires.

Indonesia declared a moratorium on new development of peatlands after particularly disastrous dry season fires in 2015 which burned 2.6 million hectares (10,000 square miles) of land and spread haze across Indonesia, Singapore, southern Thailand and Malaysia. The World Bank estimated the fires cost Indonesia $16 billion, and a Harvard and Columbia study estimated the haze hastened 100,000 deaths in the region.