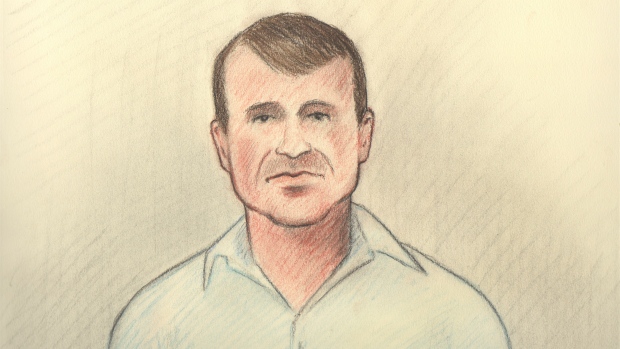 Cameron Ortis can be seen in this artist rendering from his court appearance on Friday, Sept. 13, 2019.

A professor who once worked with an RCMP intelligence official charged with breaching Canada's secrets law says the man seemed to be an “exemplar of discretion.”

Paul Evans, a political science professor at the University of British Columbia, says he served on Cameron Ortis's doctoral dissertation committee and worked with him on several projects.

Ortis, 47, was arrested on Thursday and charged under three sections of the Security of Information Act as well as two Criminal Code provisions.

He's accused of trying to disclose classified information to a foreign entity or terrorist group.

An insider familiar with the case, but not authorized to speak about it publicly, has said Ortis had served in a civilian position as director general of an RCMP intelligence unit.

Evans says he worked with Ortis at UBC over the course of several years, and they later met socially from time to time.

He says that after Ortis took up his RCMP position in Ottawa, he never discussed the specifics of his work.

“He did not discuss the details of his work and throughout was an exemplar of discretion and integrity in our interactions,” he said in a written statement.

“Nothing in my experience with Cameron would lead me to suspect he would be any way involved in activities that would lead to such charges,” he added. “Like others who know him well, I was shocked by the news of the arrest of a very fine Canadian.”

Ortis had been a political science graduate student starting in 1999, finishing his PhD at UBC in 2006, Evans said. The pair worked together on training programs for junior researchers from policy institutes in Asia, which included two essays they published together.

Evans said the essays, published in 2002 and 2003, were about ways “the internet was being used for positive and negative purposes in the region.”

Another UBC colleague, political science professor Brian Job, has also said he was surprised by news of Ortis's arrest.

“Nothing in my experience with Cameron would lead me to suspect his alleged involvement in the activities for which he charged,” Job said on Friday. “Indeed, the exact opposite is true.”