'It's when we're alone and quiet that it hurts,' dad of stage collapse victim says 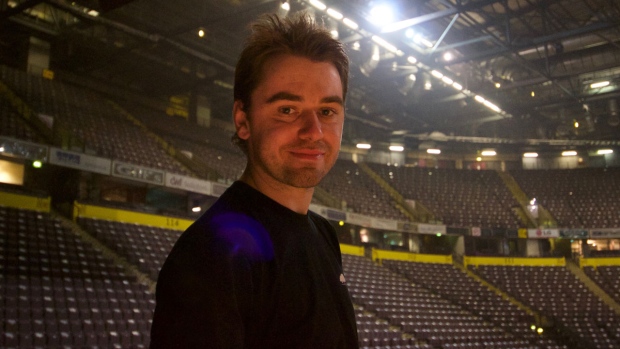 Scott Johnson landed his dream gig, touring with one of the biggest rock bands in the world, Radiohead. He died on June 16, 2012, during the setup at Toronto's Downsview Park at the final concert of the band's North American tour. (Photo courtesy Ken and Sue Johnson)

TORONTO -- The father of the man killed by a collapsed stage at a Radiohead concert in Toronto in 2012 hopes an inquest into his son's death provides a blueprint to avoid such tragedies in the future.

Ken Johnson is fresh off a tour of the Office of the Chief Coroner to get his bearings before the inquest into his son's death begins on Monday.

"I hope the outcome of the inquest will identify any gaps that existed and create new guidance to make sure these things don't happen," Johnson told The Canadian Press in a phone interview on Sunday.

Scott Johnson, Radiohead's drum technician, died on June 16, 2012, when a massive scaffolding structure crashed down on him just hours before the British band was set to take the stage at Downsview Park in Toronto. Three others were hurt in the collapse.

About a year after the collapse, 13 charges were laid against the show's promoter, Live Nation, contractor Optex Staging and engineer Domenic Cugliari under provincial health and safety laws.

The subsequent trial was derailed when the presiding judge declared he had lost jurisdiction over the case given his appointment to a higher court. That decision led to a senior justice declaring a mistrial, and a new hearing was planned. In September 2017, those charges were stayed after a judge ruled the matter took too long to get to trial.

The development shifted the focus to a coroner's inquest, an independent investigation designed to bring public attention on the circumstances of a death, rather than to assign blame. The jury may make recommendations, which are not binding.

"The inquest is not about whether the engineer or the contractor or the promoter were wright or wrong, but what they can do to prevent it," Johnson said. "I'm still a bit worried that they will be defending or trying to explain the situation rather than coming up with methods to eliminate any doubt and come up with solutions."

Johnson, from the village of Doncaster, England, flew to Canada on Saturday. His wife did not want to come, he said, because she doesn't want anything to do with Canada.

"Life is different now, and as my wife says, I'm as good as it gets," he said.

Scott Johnson's head was crushed, his skull fractured and his brain pressured when the scaffolding fell on him, his father said. And though his son was killed instantly, the pain of the loss "doesn't go away" for him and his wife.

"They say time heals, but it doesn't appear to be. You can't deal with things as you would have done (in the past)," he said.

The couple have struggled since their son died, said Johnson. They've both dealt with depression, with his wife still on medication to treat her mood seven years later. At 67, Johnson still works, ironically, as a scaffolding inspector. The work keeps his mind busy.

"It's when we're alone and quiet that it hurts," he said, choking back tears. "We used to holiday in Greece, the beach during the day and the bar at night, but we can't sit on a beach now. We've not been for seven years now. You can't sit still because your mind comes to Scott."

He said they no longer spend much time at their village's pub, because they became known as the couple who lost their son, rather than the couple whose son was part of the Radiohead team. And while Johnson still cries whenever he talks about his son, he refuses to stay quiet.

"We think we're OK. We're not going to jump off a bridge and we're not yet in the crazy house."

Of course they long to see their son, if only for a moment. A few weeks ago the couple were talking about their boy and Johnson's wife said she wished she could hold her son's hand at the end of his life and continue to hold it into the afterlife.

"You don't wish your life away, but to some degree, I understand what she's saying," Johnson said.