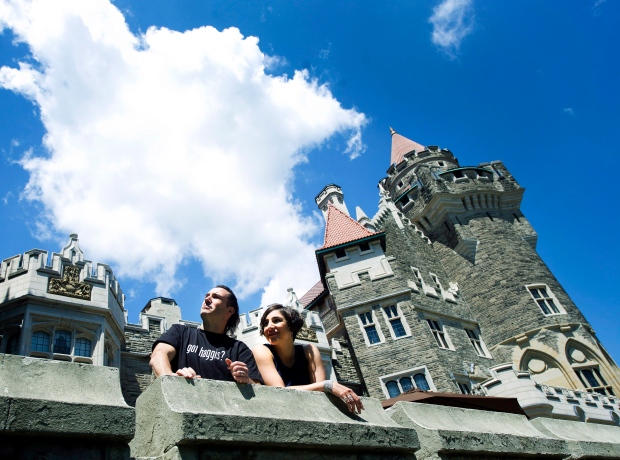 The silver piece is a tribute to the McCausland dome that covers the conservatory of the landmark castle.

Finance Minister Joe Oliver, who unveiled the commemorative coin, called it a fitting tribute to Casa Loma, which he described as a "gothic revival jewel" celebrating the "highest form of architectural craftsmanship."

"Just like it took countless panes of glass to meticulously create the McCausland dome, the mint is gradually putting together a rich and panoramic picture of Canada with every new coin it produces," Oliver said.

The "striking" new coin, he said, will serve as a tribute to one of Canada's "artistic treasures."

Casa Loma was built between 1911 and 1914 and has become a popular tourist attraction and event venue.

The coin, produced by the Royal Canadian Mint, is covered in translucent and opaque enamel to reflect light in the same way as stained glass.

Casa Loma CEO Nick Di Donato said it was an "absolute thrill" to see the mint commemorate the stained-glass dome.

"This new coin is a celebration of just one of the many spectacular features that make Casa Loma a must-see destination for thousands of visitors to Toronto every year," he said.

Marc Brule, CEO of the Royal Canadian Mint, said the coin showcases the "captivating beauty" of the castle.

"The remarkable artistry of Robert McCausland and the spectacular canvas of Casa Loma are featured on this stunning new coin, skillfully painted by hand," he said.

The keepsakes are available to order through the mint.