HALIFAX -- The lawyer for one of the men facing child pornography charges after the death of Rehtaeh Parsons says reaction to the case on the Internet amounts to a rush to judgment.

After the two men made their first court appearances in the case Thursday, defence lawyer Josh Arnold said inappropriate comments have been made on social media sites about the young men since allegations first surfaced in April about cyberbullying that Parsons endured before she attempted suicide and was later taken off life-support.

"Individuals on the Internet and certain members of the media conducted their own one-sided trial in this matter. No due process was given," said Arnold.

The cases of the two 18 year olds were put over until Sept. 19 because lawyers for the men are seeking further disclosure of evidence from the Crown.

Neither man showed emotion as they briefly stood in court. They left the courthouse without commenting.

Parsons' parents were not in court but after the hearing her uncle made a plea for justice for his niece, saying she suffered deep distress before her death.

"This is terrible what happened. The level of anger and isolation that my poor niece, starting at 15 years old until she was 17 had to deal with is something a person her age should never, ever have to deal with," Michael Parsons, 49, said outside court.

Rehtaeh Parsons was taken off life-support following a suicide attempt in April that her family says was prompted by months of bullying. They say the 17-year-old girl was tormented after a digital photograph of her allegedly being sexually assaulted in November 2011 was distributed around her school.

Police have said there were no plans to lay charges in connection with the alleged sexual assault.

The RCMP said earlier this year that they looked into the allegations of sexual assault and an inappropriate photo but after consulting with the province's Public Prosecution Service, they concluded there weren't enough grounds to lay charges.

The names of the teens who have been charged cannot be released because they were under the age of 18 at the time of the alleged offences and are charged under the Youth Criminal Justice Act.

Court records say the release conditions of the man charged with distributing and making child pornography have been changed from earlier requirements that he not possess a cellular telephone or any device that can access the Internet, and that the man remain in Nova Scotia. The amendments approved Thursday removed the prohibitions on cellphones and Internet access, and allowed the man to travel outside the province after giving 24 hours' notice to police.

The two men were charged after police reopened their investigation a week after the girl's death. At the time, police said they had received new and credible information from someone who was willing to co-operate with their investigation.

After Parsons' death the provincial government ordered a number of reviews including one into the original police investigation and the Nova Scotia Public Prosecution Service's handling of the case, and two others into the help she received at school and the care she received at a hospital in Halifax.

A new law also went into effect last week in Nova Scotia that allows people to sue if they or their children are being cyberbullied. Victims can also seek a protection order that could place restrictions on or help identify the cyberbully.

After the two men were arrested last week, Rehtaeh's father said the development brought the family some solace but he expressed disappointment that his daughter never saw justice served.

"It's sad and in a way it's a bit of relief that there may be some sense of justice done in this case."

Prime Minister Stephen Harper, who earlier this year met with Leah Parsons, Rehtaeh's mother, said he hoped that the girl's family would be given a degree of comfort by the arrests.

The prosecution of the two Halifax men is being handled by a Crown attorney from Ontario. Chris Hansen, a spokeswoman for the Public Prosecution Service, has said because the department provided advice to police during the initial investigation, it asked Ontario Crown attorneys to take over to avoid any "real or perceived" conflict.

Outside the courthouse, a lone protester held a cardboard sign that read "Justice for Rehtaeh Parsons."

"I just want to see the court process play out." 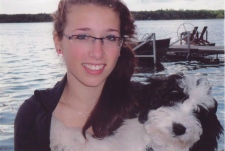 Rehtaeh Parsons is shown in a handout photo from the Facebook tribute page 'Angel Rehtaeh.'