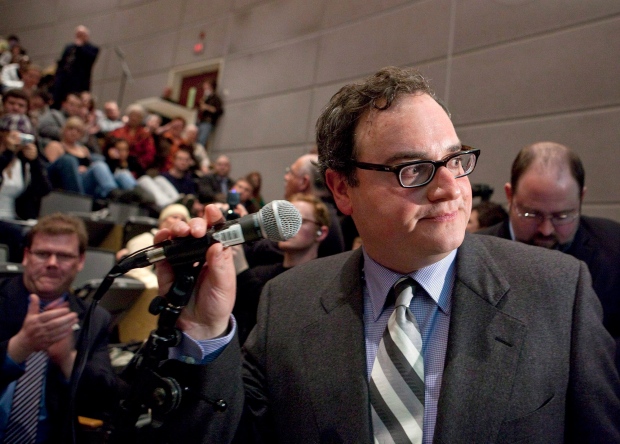 Ezra Levant is shown at the University of Ottawa in Ottawa on Tuesday, March 23, 2010. (The Canadian Press/Pawel Dwulit)

TORONTO -- Sun News Network host Ezra Levant took the stand Friday in his defence in a defamation lawsuit, repeating his contention in a series of blog posts that the lawyer who is suing him is a "liar."

Khurrum Awan, now a lawyer in Saskatchewan, was completing his articling and looking for work as a lawyer when he alleges the libels most damaging to his reputation were posted. He is seeking $100,000 in damages.

Levant's posts centred around Awan's testimony at a British Columbia Human Rights Tribunal case about a complaint over an article in Maclean's magazine from 2006, titled "The future belongs to Islam." Awan was a law student when the article was published and was one of a group of students who alleged the article was Islamophobic.

The human rights tribunal hearing took place in 2008, before the inception of Sun News, so the posts were on Levant's personal blog. Levant had been campaigning against the tribunals, which he refers to as kangaroo courts, and attended the hearing so he could blog about it, he told court Friday.

There was a "bombshell moment" for Levant during Awan's testimony, Levant said Friday.

The "bombshell" was about Awan's tribunal testimony on what the students proposed to Maclean's during a meeting about their concerns with the article. It was different than what Awan had said in media interviews leading up to the tribunal, Levant said.

The students wanted Maclean's to publish a rebuttal article and there are discrepancies over whether they pushed for an author of their choice or a "mutually agreeable" author. Before the hearing Awan had said they asked for a mutually agreeable author, Levant said. But Awan testified that while the students wanted to suggest that in the meeting, Maclean's shot them down before they could raise it.

Levant suggested in court Friday that the students' "mutually agreeable" contention made them come across as more reasonable and moderate than demanding an author of their choice.

Levant also referred to Awan on his blog as a "serial liar," which he defined as the "continuous repetition" of a lie.

Levant went on, in his blogs, to refer to Awan as "money grubbing," because the students also asked Maclean's for money. Awan testified they had suggested Maclean's donate a sum of money to a human rights organization.

Levant's lawyer, Iain MacKinnon, has said the defence is primarily one of fair comment.

To establish fair comment, the statements must be on a matter of public interest, based on fact, recognizable as commentary and whether a reasonable person could honestly hold that opinion.

"There's no doubt Mr. Levant sometimes uses colourful language or sometimes a derisive tone," MacKinnon said earlier this week in his opening statement. "That is perfectly allowed under the defence of fair comment."

Levant was commenting on a matter of public interest, MacKinnon said, noting Awan never asked Levant for a correction.

Levant also accused Awan on his blog of being in a glaring conflict of interest. He believed that Awan was both assisting the prosecution and being a witness.

Though Awan was not the complainant to the human rights tribunal, he was involved with the Canadian Islamic Congress and previously served as its youth president, court heard. Awan had also been hired by the same law firm as the prosecuting lawyer, though Awan's lawyer said that was a coincidence.

Levant also testified that he saw Awan sit with the lawyers at the hearing and do tasks for them such as photocopying, generally done by junior lawyers.

Awan denied that he sat at the counsel table.

Levant is to be cross-examined on Monday and closing arguments are expected to be delivered Tuesday.