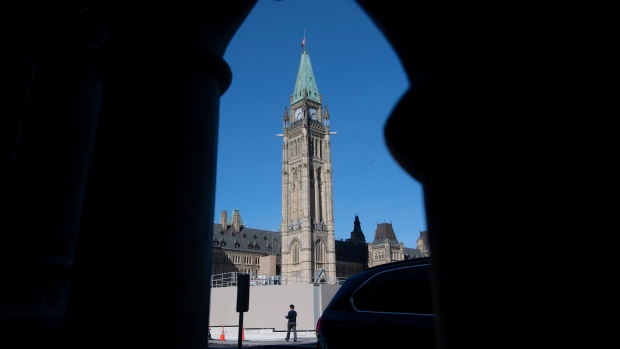 OTTAWA - The Liberal government waited until the House of Commons was about to adjourn for three months to introduce a bill aimed at protecting Canadians from online hate speech.

The eleventh-hour move Wednesday fuelled speculation that Prime Minister Justin Trudeau is intent on padding the Liberals' record before calling an election sometime this summer.

“Once again, we see all Canadians can expect from the Trudeau Liberals are photo ops and announcements,” said Conservative justice critic Rob Moore.

“The fact this bill was brought forward in the last minutes before Parliament ends for the summer shows this Liberal government is only interested in political posturing ahead of the next election - not rooting out hate speech.”

Bill C-36 would die on the order paper should an election be called, along with all other bills stuck at various stages of the legislative process.

Justice Minister David Lametti insisted the government is “very much committed” to the bill, which he said “demonstrates the commitment our government has towards fighting hate.”

It would amend the Canadian Human Rights Act to reinstate an amended version of a controversial section that was repealed in 2013 amid widespread criticism that it violated freedom of speech rights.

It would also amend the Criminal Code and Youth Criminal Justice Act.

The bill would define hatred to mean “the emotion that involves detestation or vilification” that is “stronger than dislike or disdain.” And it would specify that a statement would not be considered hate speech “solely because it discredits, humiliates or offends.”

That's considerably more narrow than the original section 13 of the Human Rights Act, which defined hate speech as anything “likely to expose a person or persons to hatred or contempt” on the basis of their race, gender, religion or other prohibited ground of discrimination.

“And some of the worst examples of hate are visible online, in that virtual public space.”

The bill would allow individuals or groups to file hate speech complaints with the Canadian Human Rights Commission, which would be empowered to order perpetrators to cease communications or, in some cases, to pay monetary compensation and penalties.

It would also provide more money to the commission and the Canadian Human Rights Tribunal to rapidly screen out complaints that don't meet the new definition and conduct fair and efficient hearings for those that do. The tribunal would be empowered to award litigation costs against anyone deemed to have abused the process.

The bill would apply to the individual authors of online hate, not to the social media platforms on which they post their messages. Long-promised legislation governing how the platforms deal with hate speech is still to come, with the government promising consultations this summer on proposed regulations.

The narrow definition of hate speech in the bill did not satisfy the Conservatives, who have accused the Liberals of muzzling free speech with another bill aimed at regulating online streaming giants.

“But this bill will not target hate speech - just ensure bureaucrats in Ottawa are bogged down with frivolous complaints about tweets.”

He accused the Liberals of “empowering a bureaucracy to subjectively restrict the rights of Canadians.”

The bill comes weeks after police said a 20-year-old man intentionally drove his truck into a Muslim family out for a walk in London, Ont. Nathaniel Veltman faces four first-degree murder charges and an attempted murder charge that prosecutors allege constitutes an act of terrorism.

“The recent events in London, tragically, although they didn't raise new issues, did put this in the spotlight,” said Lametti, who was joined by a number of other ministers at the late news conference.

“We heard the cries to say, 'We know you're moving on this but we want you to act as quickly as possible.”

Liberal MP Arif Virani, Lametti's parliamentary secretary who conducted extensive consultations on the subject, said the government has to consider how radicalization can be enhanced online.

“No politician can draw a straight line definitively between events but we're using the best evidence that we have before us and what we're hearing from those consultations ... to curtail this hatred.”

Virani said those who suggest the bill would suppress free speech have it backward. It's vulnerable individuals and groups who are being silenced, fearful of becoming the target of hate messages, he said.

Pressed on whether the amendments to the Human Rights Act would realistically make an impact on online hate speech - given that victims would have to initiate a potentially years-long tribunal proceeding to remove an offending comment - the ministers said the changes are an important step advocates have long been asking for.

“Clarifying the definition of hatred, both in the criminal law and in the CHRA, will be helpful in defining the parameters of the public space,” said Lametti.

“We won't catch everything that's awful out there. But we will identify a lot of things that are unlawful and that's what we're targeting.”