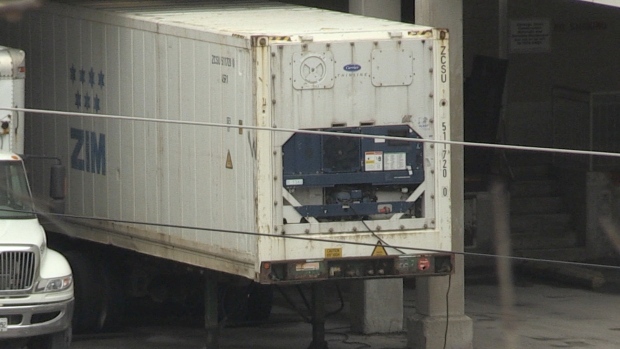 A refrigerated trailer is seen parked in the loading area at the London Health Sciences Centre in London, Ont. on Tuesday, Jan. 5, 2021. (Jim Knight / CTV News)

LONDON, Ont. -- A hospital network in London, Ont., says it storing bodies in a mobile unit after its morgue reached capacity.

The London Health Sciences Centre says new processes due to the pandemic have meant more time is needed to secure arrangements for bodies.

It says that has led to the need for more interim "body holding solutions."

The hospital network says its morgue, which serves as a regional forensic pathology unit for southwestern Ontario, can hold up to 28 bodies at a time.

Chief information officer Glen Kearns says the use of a mobile unit is a temporary measure and one that is being used for the second time since the pandemic began.

He says the hospital network expects its morgue capacity issues to be resolved within days.

The hospital network says its morgue holds bodies for the period of time when coroners and families work together to make arrangements for the care of a loved one's body after death.

This report by The Canadian Press was first published Jan. 5, 2021.