Man, 26, charged in east end drive-by that led to crash 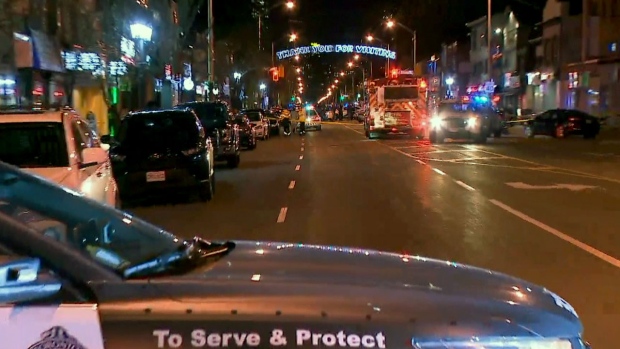 Emergency officials are seen investigating in the area of Chester and Danforth avenues on May 10, 2019.

A 26-year-old man is facing an attempted murder charge in connection with a drive-by shooting last week that injured a 34-year-old man who crashed his car in Greektown while fleeing the scene.

At about 10:06 p.m. on May 10, police were called to Bloor Street East and Castle Frank Road for a report of a shooting.

Investigators allege a 34-year-old victim pulled up to the intersection in his vehicle, when a white hatchback pulled up alongside him.

A suspect inside the hatchback fired into the victim’s vehicle, striking him at least once.

The victim then sped off in his car east on Bloor, fearing for his life, with the suspect vehicle in pursuit.

He later lost consciousness and crashed his car into a building near Chester TTC Station, approximately 1.5 kilometres away from where the shooting occurred.

Sometime later, police say they executed a search warrant on a home somewhere in East York, where they allegedly discovered a 9mm firearm with an altered serial number.

They also located the white hatchback they say was used in the attack.

A suspect identified as Maliq Crush was arrested and charged with attempted murder, discharge firearm with intent, careless storage of a firearm and other offences.

He appeared at College Park courts on Wednesday.

Police say they believe there was a second suspect inside the white hatchback at the time who has not yet been identified.