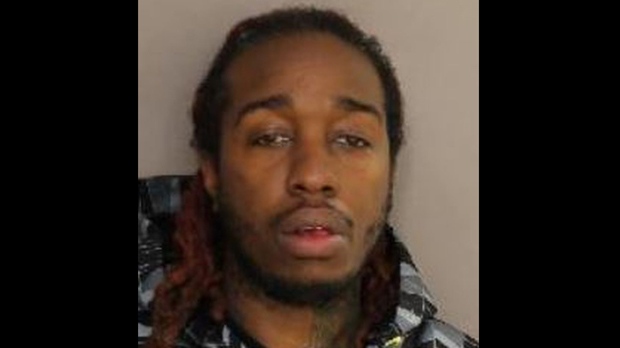 Corey Denton, 28, is shown in a handout image from Toronto police.

A 28-year-old man is facing a charge of attempted murder in connection with a shooting in Scarborough’s Agincourt neigbourhood earlier this month that sent one person to a trauma centre.

Sometime after 6:55 p.m. on Sept. 5, police were called to Sheppard Avenue East and McCowan Road for a report of gunshots heard.

Witnesses told police they heard between four and ten gunshots and then saw a vehicle flee the area at a high rate of speed.

A short time later, a man suffering a gunshot wound to his lower body was dropped off at hospital. He was later transferred to a trauma centre for further treatment.

After an investigation, police said that they located a suspect in the area of Kennedy Road and Eglinton Avenue East on Wednesday.

He was also allegedly in possession of a loaded Glock 9mm handgun at the time of his arrest.

The suspect was identified by police as Corey Denton.

Denton was charged with 10 offences including attempted murder, aggravated assault and carrying a concealed weapon.

He appeared in court at 1911 Eglinton Avenue East on Thursday morning.

Police investigate after a shooting left one person injured in the area of Sheppard Avenue East and McCowan Road Wednesday September 5, 2018.