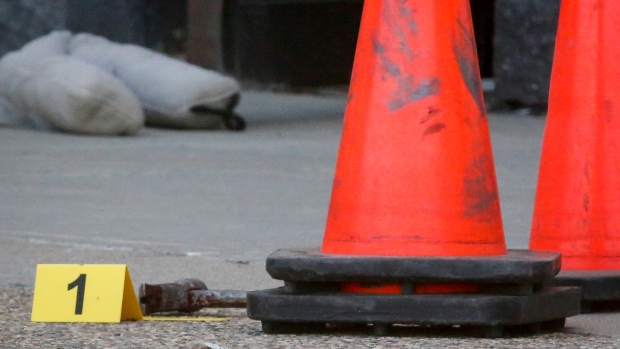 A bloodied hammer lies on the sidewalk after a physician died after he was attacked in an examination room at the Village Mall walk-in clinic in Red Deer, Alta., Monday, Aug. 10, 2020.THE CANADIAN PRESS/Jeff McIntosh

RED DEER, Alta. -- RCMP have charged a man with first-degree murder in what they are calling a targeted attack of a doctor at a walk-in medical clinic in central Alberta.

Deng Mabiour of Red Deer, Alta., also faces charges of assault with a weapon and assault of a police officer.

The 54-year-old was arrested at the Village Mall Walk-In Clinic in Red Deer on Monday morning.

Dr. Walter Reynolds, who was 45, was rushed to hospital where he was pronounced dead.

A witness told media outlets that she saw a man in the clinic with a hammer and a machete.

An impromptu memorial for Dr. Walter Reynolds, who died after he was attacked in an examination room rests outside the Village Mall walk-in clinic in Red Deer, Alta., Tuesday, Aug. 11, 2020.THE CANADIAN PRESS/Jeff McIntosh