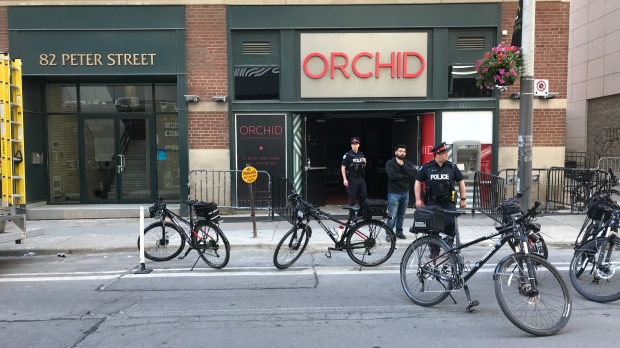 Police are shown investigating at the scene of a homicide on Peter Street near Adelaide Street. (Craig Wadman)

A 33-year-old man is dead after a shooting at a downtown nightclub early Sunday morning.

Police say that they were called to Orchid Nightclub on Peter Street near Adelaide Street at around 2:55 a.m. after staff located the victim while cleaning up for the night.

Police say that the victim was suffering from at least one gunshot wound. He was rushed to hospital via emergency run with “absolutely life threating” injuries, police say. He was then pronounced dead sometime overnight.

No information has been released about potential suspects at this time. Investigators say he suffered one gunshot wound.

Speaking with CP24 on Sunday morning, Const. Dave Hopkinson estimated that hundreds of people were likely in attendance at the nightclub when the shooting took place. He said that investigators need those people to come forward with any photos or video they may have taken inside the club throughout the night.

Hopkinson said that police did locate a firearm “very close” to where the victim was found, though he said that the weapon will have to undergo testing to determine whether it was used in the homicide.

He said that it remains unclear why nobody reported the shooting when it happened, though he said that the noise inside the club may have masked the sound of gunshots.

“It is very, very difficult at the best of times to hear anything in a nightclub,” he said.

Jordan Armstrong, 33, shown in an image from his Instagram page.