Man found without vital signs after house fire in Parkdale

One man suffered life-threatening injuries after a fire broke out in the kitchen of a home in Parkdale this morning.

Toronto Fire Capt. Adrian Ratushniak said crews were called to the area of Lansdowne Avenue and Queen Street at around 5:10 a.m. for a reported fire.

When firefighters arrived on scene, they found smoke in the basement of the house.

One man was found without vital signs inside the home but was resuscitated. He was rushed to hospital in life-threatening condition after suffering from smoke inhalation.

Seven other occupants of the home got out safely, Platoon Chief Dave Denysek said.

Police say the occupants of the home were first alerted to the fire by a homeless man, who noticed the smoke and knocked on the door to warn them.

"I saw him, he was sitting on the stairs over here… I walked over and said thank you, shook his hand. I was basically like, ‘You saved my life. You saved everybody’s lives in the whole building," Scott McGregor, one of the occupants of the house, told CP24 at the scene.

Jason Williams, an investigator with the Office of the Fire Marshal, also applauded the man for intervening.

“For an individual to take in upon themselves to notify the occupants of the dwelling, giving them that advance notice of the fire that was inside of the building, it is quite remarkable."

Williams said that it appears there were no working smoke alarms in the building when the fire broke out.

The fire investigator said they determined that the cause of the fire was unattended cooking. 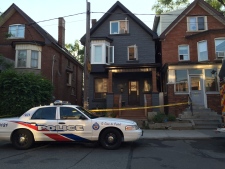 One man is in critical condition after a house fire in Parkdale. (Arda Zakarian/ CP24)