A 24-year-old man has been left with significant injuries after a violent homophobic assault at the Toronto Island this past weekend.

The incident took place around 11:30 p.m. on June 5 at the ferry docks near Hanlan's Point.

According to Toronto police, the man and a 27-year-old woman were walking in the area when they became involved in a disagreement with a group of people.

A man from the group made homophobic comments towards the victims while a woman grabbed one of them, police said.

The 24-year-old was then assaulted by two men from the group, police allege. Investigators say the suspects punched and kicked him, leaving him with “significant injuries.”

Two sources have identified the victim as David Gomez, who subsequently shared what happened to him on social media.

Cianan Liburd has been friends with Gomez for a year and said he was given consent to share the post with the media.

In the social media post, Gomez says he was called homophobic names and was subsequently “knocked unconscious, and nearly beat to death … I was dragged around, kicked and punched in the face.”

He wrote that he has a broken nose and shattered face, and went on to thank everyone who has reached out with flowers, food and support.

“At the moment he’s holding up okay. He had a little bit of surgery done to repair a couple of his injuries and still has another round of check-ups to go,” Liburd told CTV News Toronto on Wednesday.

He said he saw Gomez after the attack and described him as being in “really rough shape.”

“It was scary. It was shocking. It made me upset.”

Lidurd started a GoFundMe campaign to support his friend’s legal and medical needs. It has raised close to $30,000 so far. 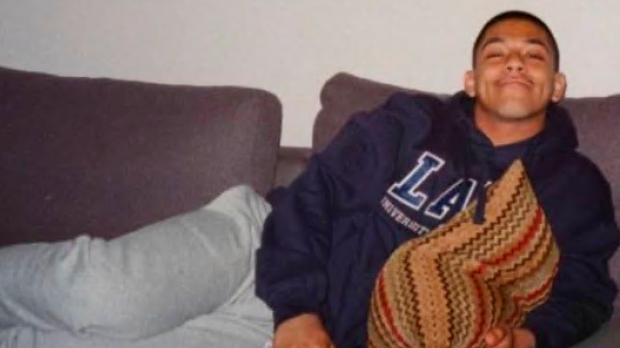 Liburd said it’s important the community is safe in their own home.

“It is very disheartening that in 2021 we’re still facing this sort of attack. Yesterday and the day before our social media, our phone calls were ringing off the hook, just individuals not feeling safe,” he said.

Modeste is calling on Toronto police to investigate the assault as a hate crime.

He said during Pride month there is heightened activities in the community and it’s important to draw get the message across.

Toronto police say that their dedicated Hate Crime Unit has been notified of the incident. They also released descriptions of three suspects.

The first suspect is described by police as a Black man who is about 25 to 32 years old. He stands about six-foot-four, weighs about 220 pounds and has a muscular build with dreadlocks. The suspect had a bicycle with him.

The second suspect is described as a white man with a thin build who was about five-foot-six inches tall. He possibly had dreadlocks, police say.

The third suspect is described as a white woman who is about 22 to 28 years old. She stands about five-foot-five, weighs about 190 pounds and has long blonde hair.

“This remains an active investigation and extensive inquiries are being carried out including scouring for video, recovering evidence and speaking to witnesses to establish the motive,” police said in a news release issued Wednesday.

“The Toronto Police Service understands that incidents of this nature cause concern in LGBTQ2S+ communities. We want to assure everyone that our investigators are working hard to determine if this was a hate crime and identify the suspects involved. Any type of hate crime will not be tolerated.”

Toronto police have not identified any of the suspects but several social media posts have linked an Ottawa Redblacks player to the attack.

In a statement released Wednesday night, the CFL team said they were aware of the allegations against defensive lineman Chris Larsen.

“I don’t pretend to know all of the specifics of this incident,” Mark Goudie, CEO of the Redblacks’ parent company, Ottawa Sports and Entertainment Group (OSEG), said.

“But let me say this, the Redblacks and OSEG are proud of the role that we play in our community and we are committed to continuing to build an organization, both on and off the field, that reflects the values of our community.”

The Ottawa REDBLACKS announced today that they have suspended defensive lineman Chris Larsen.

The Redblacks went on to apologioze for the “trauma” caused 2SLGBTQ+ community and said they have suspended Larsen as an internal investigation into the incident gets underway.

The CFL said in a separate statement that they are aware of the allegations made against Larsen and are awaiting the results of the Redblacks’ investigation.

Mayor John Tory said in a statement Wednesday he is "disturbed" by the event and "the assault of any resident is unacceptable."

"There is absolutely no place for homophobia in our city. It's time to once again say an emphatic 'no' to this hateful violence," Tory said.

Anyone with information is being asked to call 416-808-5200 or reach out to Crime Stoppers anonymously.