A manager convicted on negligence charges in connection with the 2009 deaths of four Toronto construction workers has been sentenced to three and a half years in prison.

On Monday morning, a judge handed down a sentence of three and a half years for each offence to be served concurrently.

Four construction workers were killed and one was seriously injured when they fell more than 100 feet after the scaffolding they were working on collapsed at a Kipling Avenue highrise on Dec. 24, 2009.

The company the men worked for was charged almost $1 million following the accident.

A Toronto court previously heard that Kazenelson, who was the project manager overseeing the job, knew that fall protections were not in place but allowed the employees to work on the scaffolding anyway.

Speaking with CP24 after the sentencing, Joel Duff of the Ontario Federation of Labour praised the decision as a precedent-setting deterrent for future negligence on the part of employers.

“The law was changed about 12 years ago to make it possible to get a criminal conviction for an employer whose criminal negligence leads to death in a workplace and in that time we’ve never seen that law applied, we’ve never had one employer go to jail,” he said. “We hope that it sends shivers down the spine of employers around the province.”

Det. Kevin Sedore, the investigating officer on the case, echoed that message.

“I think this is going to send a clear message to other employers as well as supervisors and people in supervisory roles as to what can happen,” he told CP24.

The Crown previously said it would recommend a sentence of four to five years in prison while the defence had previously suggested that one or two years would be more appropriate under the circumstances.

Kazenelson’s lawyers are expected to file an appeal.

Four workers were killed after scaffolding collapsed at a Kipling Avenue highrise on Dec. 24, 2009. 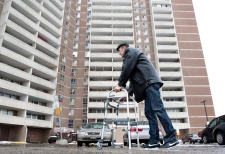 Uzbek refugee Dilshod Marupov, 22, uses a walker in front of a Toronto apartment building Friday, December 17, 2010 where he was almost killed in an industrial accident a year ago. Marupov is the lone survivor of a scaffold collapse that killed four migrant workers last Christmas Eve. THE CANADIAN PRESS/Darren Calabrese