A Toronto councillor says he will honour a bet made between the city’s top politico and the president of the borough of Brooklyn over a basketball series.

Last month, Toronto Mayor Rob Ford accepted a ‘friendly wager’ issued by Brooklyn Borough President Eric Adams on the outcome of the NBA playoff series between the Raptors and the Nets.

The wager followed a release issued by Adams in response to Raptors general manager Masai Ujiri’s comments ahead of Game 1 of the series when he yelled “F--- Brooklyn” to fans gathered at Maple Leaf Square.

“I feel it is extremely important for people in all cities to be involved in sports, be it school and extra-curricular programs for our youth, staying active as an adult, or cheering on our local teams throughout their seasons,” a statement released by Ford at the time said.

“I would be happy to take you up on your offer of a friendly wager, with the winner receiving a CD of a favourite local artist.”

The Nets ended the Raptors season with a 104-103 win Sunday afternoon in Toronto. The win comes just days after Ford confirmed that he would take a leave of absence to address substance abuse issues.

Monday night, Coun. Josh Matlow said that he would honour the bet made by Ford following a phone call from a New York media outlet earlier in the day.

“I simply said yeah, I think we should,” Matlow told CP24 of the phone call asking if the wager would be paid. “A bet’s a bet and the mayor is not here to come through with the commitment that was made on behalf of Toronto, and I think we should.”

Matlow was quick to dismiss the idea that the move might be perceived as insensitive given the mayor’s current capacity.

“As sensitive as I think we should all be to Rob Ford’s journey to seek help, life must go on,” Matlow said. “Quite frankly, this is a very light-hearted measure, and I think it’s important to come through with promises we make.” 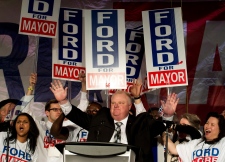 Toronto Mayor Rob Ford reacts as he speaks to his supporters during his campaign launch in Toronto on Thursday, April 17, 2014. (The Canadian Press/Nathan Denette)