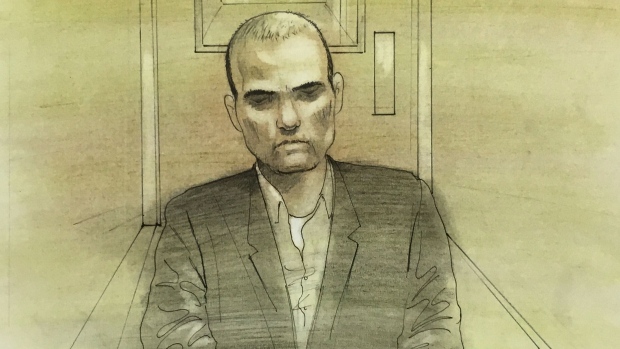 Alek Minassian is seen during his murder trial being held via videoconference on Nov. 10, 2020. (John Mantha)

Alek Minassian spoke in a monotone voice and was "devoid of emotion" when he recounted the day he drove a rented cargo van on sidewalks along Yonge Street, running over pedestrians in his path, a psychiatrist said at the 28-year-old's murder trial on Wednesday afternoon.

Dr. Rebecca Chauhan, a psychiatrist at Hamilton’s St. Joseph's Healthcare Centre who specializes in child and adolescent psychiatry, told the court Wednesday that back in 2018, she was asked by a colleague, one of the defence’s psychiatrists who had already assessed Minassian, to provide a second opinion about his autism spectrum disorder diagnosis.

She said she met with Minassian on three separate dates in September 2018 and during their conversations, he spoke "freely" and with "a flat affect" when describing the van attack.

"He was quite forthright, more so than you likely would have expected," said Chauhan, who was called as a witness for the defence. "I didn't really see any range of emotion."

His demeanor, she said, was in "stark contrast" to the traumatic events he was describing and she added that he shifted between looking away and displaying "intense," "unnerving" eye contact.

"When describing other people's emotions, there was a flatness," she said.

She said he told her his motivation for the attack was to gain notoriety and get attention from those who thought he was "nothing."

Chauhan said Minassian did not show remorse for his actions and said he was "happy" and thought it was "worth it" because he received the attention he desired.

He mentioned the "shock value" of him carrying out such an attack, as "people would never have expected it from him" because of his "low self-confidence," she said.

She said he told her he knew the pedestrians he was hitting were random but he had hoped to hit more young, attractive women.

Minassian, who faces 10 counts of first-degree murder and 16 counts of attempted murder, has admitted to planning and carrying out the attack in retribution for years of sexual rejection from women.

According to an agreed statement of facts previously submitted to the court, Minassian rented a white cargo van on April 23, 2018 and drove it on sidewalks along a busy stretch of Yonge Street in North York, deliberately running over pedestrians.

Ten people were killed and 16 others were wounded in the attack.

In a lengthy police interview following his arrest, Minassian described the anger he felt toward women and admitted to being a member of the “incel movement,” an extreme online community consisting of men who claim to be "involuntarily celibate."

His lawyers argue that Minassian was not criminally responsible for his actions (NCR) under Sec. 16 of the Criminal Code.

Under Sec. 16, a person is NCR if they were suffering from a mental disorder that rendered them “incapable of appreciating the nature and quality of the act or omission or of knowing that it was wrong.”

Court has previously heard that one of the experts hired by the defence found that while Minassian is not psychotic and has not experienced symptoms of psychosis, such as auditory and visual hallucinations, his “autistic way of thinking” is “similar to psychosis.”

Chauhan, who did not provide testimony about Sec. 16 or how it could be applied in Minassian's case, said she saw evidence that Minassian has a significant "impairment" in his moral reasoning.

"That does not mean by any means he doesn't have the capacity to make moral decisions," she told the court. "He did really seem to struggle with fully grasping the internal world of other people."

She added that when asked about his parents' reaction to the incident, his understanding of their emotions appeared to be "superficial."

She said he made note of their facial expressions but lacked depth in his understanding of how they may be feeling.

"His understanding of why his parents would be feeling such a way was very limited," she said.

When describing his own emotions, she said he tended to focus on body symptoms, such as feeling hot when he is angry.

She said she saw evidence that Minassian could become "hyper-fixated" on certain things.

Chauhan said in high school, Minassian had developed a "ritual" of researching school shootings and said he "fantasized about mass murders."

She said his interest in those topics appeared to diminish somewhat when he started college but later resurfaced.

In the months leading up to the attack, she said he reported a preoccupation with the "manifesto" of Elliot Rodger, who killed six people and injured fourteen others in an attack in Isla Vista, California in May 2014.

Minassian has previously described Rodger as the "founder" of the "incel movement" and said the Isla Vista massacre inspired him to plan and execute his own attack.

During his conversations with Chauhan, she said he drew parallels between himself and Rodger, including that they were both diagnosed with autism, were lonely, and struggled in developing relationships with women.

Chauhan said before Minassian settled on using a van for his attack, he thought about getting a gun but decided it would be too difficult to obtain one.

The date of the attack was one day after his last school assignment was due and one day before he was scheduled to start his new job, she said.

She said Minassian didn't understand why people would find it odd that he bothered to follow through with his school assignments prior to the attack.

"It was something he had started and he thought he should finish it," she said. "This is another example of his rigid thought process."

She said he didn't consider life after the attack because he had thought he "would die."

Chauhan said Minassian told her he attempted to commit suicide in jail by consuming liquid soap but after the unsuccessful attempt, he decided to "behave" because he didn't think he'd be able to end his life in prison.

She noted that Minassian "absolutely knew" what he was doing was against the law.

The trial will resume on Thursday at 10 a.m.