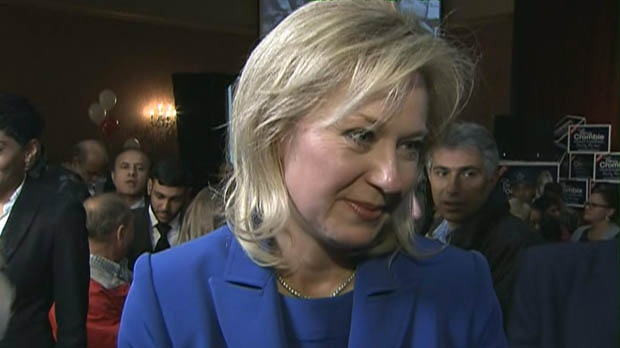 Mississauga Mayor Bonnie Crombie is shown in this file photo.

Mississauga is giving some serious thought to packing its bags and leaving Peel Region, much to the dismay of the mayor of neighbouring Brampton.

On Thursday, Mississauga council voted in favour of undertaking a study to determine whether it is in the city’s best interest to become a single-tier municipality.

Speaking with CP24.com Thursday, Mississauga Mayor Bonnie Crombie said the study will help the city get all the facts to determine whether a case can be made for making the change.

“At the end of the day, Mississauga feels it is time to control our own destiny,” Crombie said, adding that smaller cities such as London, Hamilton and Barrie all operate as single-tier municipalities.

With a population of almost 800,000, Mississauga is the third largest city in Ontario and the sixth largest in Canada.

Mississauga has been a part of the regional municipality, which includes Brampton and Caledon, since the 1970s and Crombie said much has changed in four decades.

The rapidly growing city, Crombie said, contributes over 60 per cent to the Region of Peel's tax base.

On Thursday afternoon, Brampton Mayor Linda Jeffrey issued a news release claiming a review of “the future size and allocation of seats” at Peel Regional Council is already underway.

She said studying the option of leaving the region while also supporting a review of the composition of regional council is “not only disingenuous, but a frivolous use of Brampton, Caledon and Mississauga taxpayer’s money.”

“Brampton was there to help Mississauga as they grew and built out and now as infrastructure investments are needed in Brampton our largest partner wants to cut and run,” Jeffrey said.

If Mississauga were to depart from the regional municipality, Crombie said Brampton, which has a population of more than 500,000, could also operate as its own municipality.

Caledon, which has approximately 60,000 residents, could be amalgamated with neighbouring Dufferin County, she added.

“To be part of an amalgamated region doesn’t make sense for us anymore.”

She said even if Mississauga left Peel Region, the city and Brampton could continue to jointly fund utilities and the Peel Regional Police Service.

Crombie acknowledged that this has been an ongoing discussion in Mississauga for several years and was an issue explored by long-time former Mississauga mayor Hazel McCallion.

Crombie said that 10 years ago, when the council at the time undertook a governance review, the study indicated that there could be $31 million in cost savings if Mississauga were to separate.

“That was then so we would like to see if it is greater or lesser now,” she said, adding that the move could save the city money by having fewer politicians and less duplication of services.

If it is determined that a business case can be made for separating, Crombie said it is possible a referendum could be done during the 2018 election.

Ultimately, the province would need to give Mississauga the green light to operate as its own municipality.

Crombie said in her experience, Mississauga residents appear to be supportive of the change.

“All of the responses have been overwhelmingly positive,” she said.