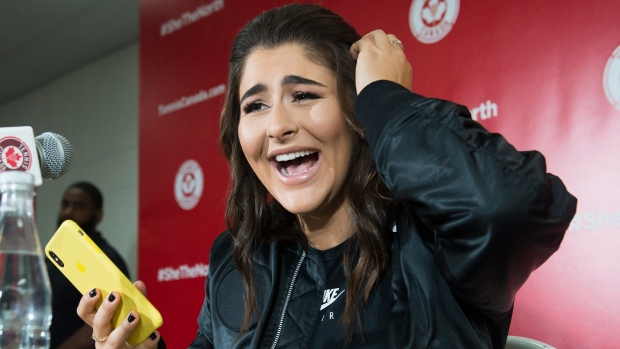 Bianca Andreescu laughs after reading a message from rapper Drake as she speaks to the media after she became the first Canadian player to win a Grand Slam singles title when she defeated Serena Williams in the final of the US Open, in Toronto on Wednesday, September 11, 2019. THE CANADIAN PRESS/Nathan Denette

TORONTO -- Bianca Andreescu's hometown of Mississauga, Ont., as well as neighbouring Toronto, are eager to hold celebrations for the Canadian tennis star.

It is not yet known if there will be any public event to honour the recently crowned U.S. Open women's champion, however. Mayor Bonnie Crombie confirmed on Wednesday afternoon that the City of Mississauga had been in touch with Andreescu's representatives to organize some sort of celebration.

"I believe they haven't firmed up her schedule yet, there's probably still a lot of moving parts," Crombie told The Canadian Press. "We made the offer to host the rally, I know that (Toronto's Mayor John Tory) wants to have a parade. They're not mutually exclusive by any sense. I think we should give her as much recognition, pay tribute, accolades, as we can. She's a pretty incredible young woman."

When asked about the City of Mississauga reaching out at a press conference, Andreescu said it was not with her directly, but she was interested in the possibility of an event.

"I've just been seeing everything on social media but damn, if that happens, that would be so crazy," said Andreescu, Canada's first Grand Slam tennis singles champion. "I was not expecting any of this. But I can get used to it. It's been pretty cool."

Andreescu also expressed interest in a Toronto parade, like the Raptors received after winning the NBA championship.

Mississauga city council passed several motions on Wednesday to honour Andreescu, including giving her the key to the city, naming a tennis court in the Churchill Meadows section of the city, and naming a street after Andreescu, with Crombie tweeting a picture of an "Andreescu Way" street sign.

"Has a nice ring to it, don't you think, ↕bandreescu--?" Crombie tweeted.

Toronto Mayor John Tory has sent a congratulatory letter to Andreescu through her representatives.

"In the letter, the mayor explained that the City of Toronto is pleased to help celebrate her win in any way that she would like," said Don Peat, spokesperson for Tory.

"The mayor is aware that Ms. Andreescu has ties to various areas in the GTA and he doesn't want to overstep on any already scheduled celebrations for the U.S. Open champion, but he also recognizes we're all eager to celebrate her as proud Canadians."

The city lit its Toronto sign in gold to honour Andreescu after her win over Serena Williams in the U.S. Open final on Saturday.

Andreescu is not expected to return to tournament play until the Beijing Open starts on Sept. 28.

"We can be patient, we're willing to work with her team," said Crombie. "We'd like to honour her as her hometown, her birthplace, where she went to school when she was young, and where she trained at the Ontario Racquet Club. We want an opportunity to honour her."

The family moved to Vaughan, Ont., a Toronto suburb, earlier in the decade to be closer to Tennis Canada's training facility.