New modelling suggests that the number of COVID-19 patients in intensive care units could steadily decrease over the next month amid lower case counts and may even drop down below 150, a critical line at which point elective care can resume at most hospitals.

The new projections paint a radically different picture than modelling released back on Jan. 12, which warned of a “severe but realistic scenario” in which the number of COVID-19 patients in intensive care units could have surpassed 1,000 by mid-February, overwhelming the healthcare system in the process.

The latest modelling provides three different scenarios on what the next month might look like in Ontario while also acknowledging that the presence of new variants remains a “significant threat to our control of the pandemic.”

It says that if cases fall at a daily rate of about one per cent Ontario is likely to see about 1,700 new infections per day by Feb. 28 but if cases were to drop by about three per cent per day the province could get under 1,000 daily cases by then. However, in the event that the more contagious B.1.1.7. variant takes hold in the community, the modelling says that case counts could begin to rise again in mid-February and surpass 2,000 a day by the end of the month.

Over the last 14 days new cases of COVID-19 in Ontario have declined by an average of 1.79 per cent per day, meaning the current path would put us somewhere between the first two scenarios.

“We are making progress, cases are down overall and while the new variants give us less room to relax and less room for error the current public health measures should work against the new variant,” Dr. Adalsteinn Brown, co-chair of the province’s COVID-19 science table, told reporters as he presented the new projections. 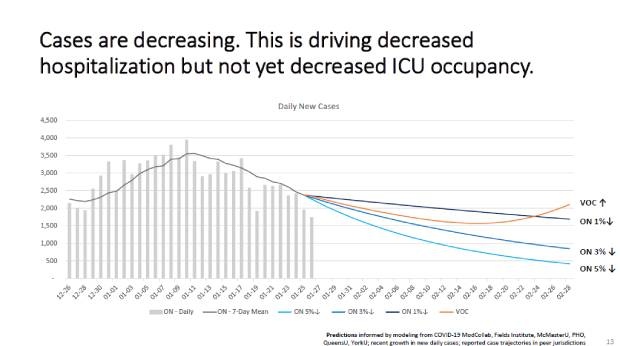 Brown said that there is an increasing likelihood that the B.1.1.7 variant, first detected in the United Kingdom, will be “the dominant version of the virus in March.” But he said that the experience of some other jurisdictions has suggested that case counts can continue to decline with the more contagious variant present so long as “stringent” public health measures are kept in place.

He said that he also believes that in-person learning can resume at schools, even with the B.1.1.7 variant circulating.

“It will be challenging decision for the provinces leaders and it may require different approaches in different regions. It is not easy but it is possible,” he said.

The modelling suggests that the transmission of COVID-19 has been on the wane since about Jan. 11, which is right around the time that the Ford government issued a stay-at-home order.

While hospitalizations have fallen since then, the number of COVID-19 patients in the ICU has held steady at around 400, which has put many hospitals under incredible strain.

The good news, Brown said, is that the lower case counts that the province has seen in recent weeks will soon have an impact on ICU occupancy even as “deaths continue to mount,” particularly in long-term care homes.

The modelling says that even if the decrease in cases stops entirely and we find ourselves in a holding pattern of sorts, the number of COVID-19 patients in the ICU should be down around 275 by the end of February. If we see a one per cent decline in cases, the ICU number should drop below 250 by then and under a scenario with a three per cent decline in cases it could get close to 150.

That number is important because it is the line where many hospitals had to stop offering elective care.

“That is very reassuring but it is important to note here that as the variant of concern line starts to take hold it doesn’t start to turn upwards again because there is obviously a delay between cases and ICU admission as patient’s conditions worsen. But it does start to turn up (eventually) and it does start to turn up the impact on our intensive care units (again),” Brown said, noting that Ontario will likely have to lower its reproductive number to 0.7 to account for the increased infectiousness of the B.1.1.7 variant. 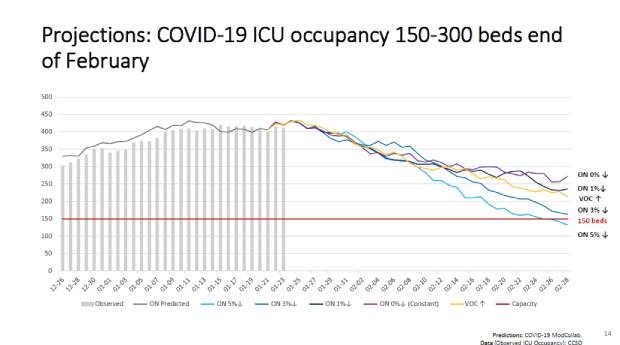 The modelling released on Thursday cites anonymous mobility data that does seem to indicate that Ontarians have moved around less since the issuing of the stay-at-home order earlier this month.

Brown, however, said that communities with a higher proportion of essential workers continue to shoulder a disproportionate share of infections and warned that case counts could quickly rise if outbreaks are allowed to fester., likening to a “forest fire.”

He also said that it will be “really important to control the inflow into the province” as new variants of COVID-19 circulate and keep public health restrictions in place.

“It is those jurisdictions that have maintained their public health measures while they have been coping with this new variant that have actually had some success and I worry a little bit about relaxing them as the prevalence of the new variant increases. It could really lead to an almost vertical like takeoff in terms of the number of cases with doubling time really shrinking down,” he said. “So I think in any place where we have a concern that cases take off you maintain the public health measures but by doing that we may be able to get kids back to school.”

In a statement released on Thursday afternoon, Ontario Medical Association President and CEO Anthony Dale said that the latest modelling demonstrates that “that Ontarians are on their way to successfully flattening the curve by the continued adherence to the province's public health measures” but are “not in the clear yet.”

“At this stage of the pandemic, with health care workers exhausted and minimal surge capacity left in the system, we must not lose our focus,” he said.