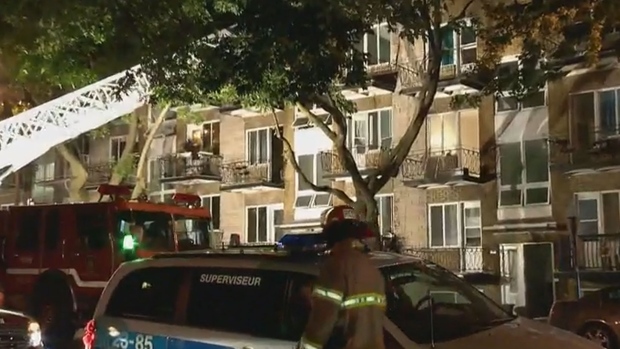 Firefighters are being credited with saving a baby from a burning building in Montreal Thursday August 31, 2017.

Montreal police crawled on the ground through dense smoke to reach an apartment where they found an 18-month-old baby alone, authorities said Thursday.

The child was taken to hospital and is expected to survive after suffering smoke inhalation in the fire.

Police spokesman Manuel Couture said eight officers were also bothered by the smoke, with four being sent to hospital.

“The police officers rushed into the apartmant building and because there was a lot of smoke they had to crawl on the floor to reach the apartment,” he said. “Inside, they found a baby aged about 18 months and it was in distress because of the smoke.

“They took the baby outside and they had to break some doors in order to evacuate the people in the other apartments.”

The fire was possibly cooking-related.

A woman who is believed to have been the child's babysitter was taken in for questioning.

Bystanders alerted police to the fire.

Police Chief Philippe Pichet congratulated the officers and said on his Twitter account he was very proud of them.