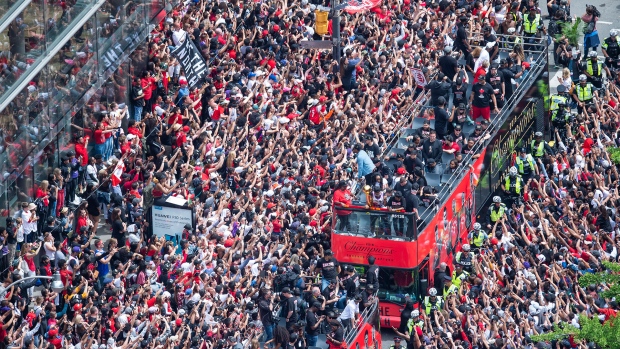 Fans cheer as the Toronto Raptors pass by during the 2019 Toronto Raptors Championship parade in Toronto, on Monday, June 17, 2019. THE CANADIAN PRESS/Andrew Lahodynskyj

More than one million people line the Toronto Raptors Championship parade route on Monday, and the TTC says it shattered an all-time record for number of trips taken.

City officials say that they estimate more than 100,000 people were huddled in and around Nathan Phillips Square for the celebration on Monday afternoon, and more than one million people attended the parade.

While not everyone who attended the parade or the celebration at Nathan Phillips got to the area via TTC, spokesperson Stuart Green said his initial numbers suggest a lot of them did.

The TTC registered approximately 2.7 million trips across its network on Monday, about 1.1 million more than an average Monday.

The number of trips eclipsed the previous record set in 2002 during World Youth Day when Pope John Paul II addressed about 800,000 Catholic pilgrims in Downsview Park.

Green said the number of trips taken that day was approximately two million.

Bell Media said 9.5 million people across Canada watched at least part of the proceedings from their television.