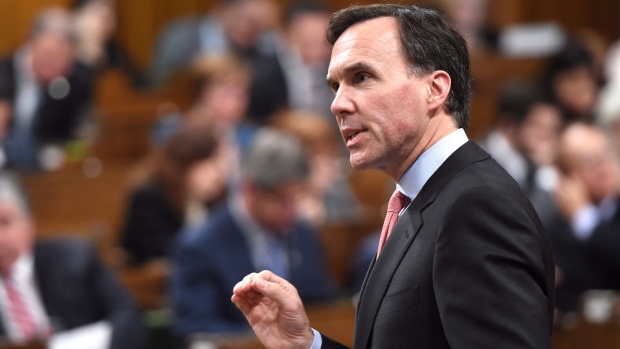 Minister of Finance Bill Morneau responds to a question during question period in the House of Commons on Parliament Hill in Ottawa on Tuesday, March 7, 2017. (Sean Kilpatrick / THE CANADIAN PRESS)

Canada’s finance minister has requested a meeting with Mayor John Tory and Ontario Finance Minister Charles Sousa to address the “growing concern” about affordable housing in the Greater Toronto Area.

In letters sent to Tory and Sousa, Finance Minister Bill Morneau wrote that as prices in the hot housing market continue to rise, middle class Canadians have become “increasingly worried” about affordability.

“A combination of low interest rates and rising home prices has encouraged some Canadians to take on high levels of debt to get into the housing market, making them more susceptible to changing economic conditions,” Morneau wrote.

“Canada Mortgage and Housing Corporation’s most recent Housing Market Assessment finds strong evidence of problematic conditions in the GTA and I am concerned that dramatic house price increases will have long-term implications for housing affordability and housing market stability.”

He requested that the leaders meet at the “earliest possible opportunity” to discuss how to address the situation.

“I believe we must take a closer look at these evolving market conditions and take stock of its implications for our largest urban area,” Morneau concluded.

He said he is hopeful that all three levels of government will be able to join forces in introducing a number of different measures to slow down soaring home prices.

“We are going to work at all of this. There is no magic wand to wave. This is a big city, it is a very attractive place for people to be and sometimes that sort of demand forces prices up. But we are going to do our best to try to address some of the deep concerns that we have,” Tory said. “We don’t want people to lose a sense of hope about the opportunity to live in this city and work or study here.”

Tory said that he hopes to use the meeting with Morneau and Sousa to discuss the possibility of a tax on vacant homes in Toronto as well as ways that the governments could work together to increase the supply of rental housing and obtain more data on the housing market in general..

He said that prospective homebuyers should be encouraged by the meeting, despite sustained double-digit gains in housing prices that have pushed many Torontonians out of the market entirely.

“I think the message is that all three governments get it and that’s why we are going to have a meeting together to discuss this,” he said.

Sousa also weighed in on the escalation of real estate prices in the GTA at Queen’s Park on Wednesday.

The provincial finance minister said that while the province has “got to find a way to help” deal with the price increases, there is “no silver bullet” solution.

"To what extent any one measure will have a positive impact or negative impact is questionable,” Sousa said on Wednesday. “We're still trying to ensure we put nobody in harm's way.”