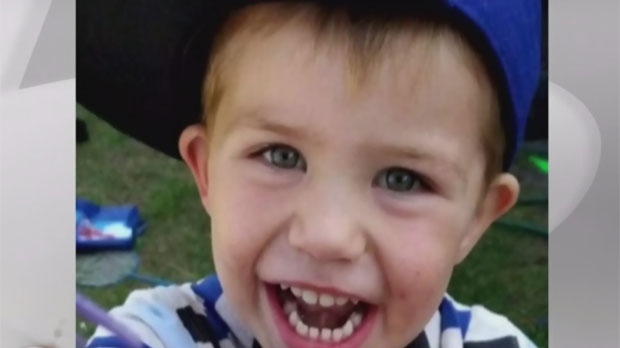 The mother of a three-year-old boy who drowned after he was swept into the Grand River in 2018 has pleaded guilty in his death.

On Tuesday morning, Michelle Hanson pleaded guilty to criminal negligence in the operation of a motor vehicle causing death via video in an Orangeville courtroom.

“She’s admitting that she didn't do what a prudent driver would have done on that night,” Hanson’s lawyer Hal Mattson told CTV News Kitchener on Tuesday.

In an agreed statement of facts, the court heard that Hanson and her son, Kaden Young, were driving in Amaranth Township when Hanson failed to stop at a road closure sign during a period of heavy flooding on Feb. 21, 2018.

Their minivan went into the river and investigators said the boy slipped from his mother’s arms and was swept away by the current as they tried to escape the vehicle.

Hanson, who was 35 years old at the time, was discovered along the banks of the river suffering from hypothermia.

“She wasn't in good shape. She did everything she could to save that baby and the water just tore it from her hands,” Mattson said.

The toddler’s body was discovered by a fisherman two months later after an extensive search operation failed to locate him.

Hanson was charged with impaired driving, dangerous driving causing death and criminal negligence causing death in October of that year.

Her trial, however, was delayed several times due to the COVID-19 pandemic.

On Tuesday, the court heard that alcohol and therapeutic amounts of oxycodone were found in Hanson’s blood on the night of her son’s death.

However, the Crown noted that a toxicologist was unable to provide evidence of impairment.

Mattson said Hanson erred in judgement by driving through the blocked area during poor weather conditions.

“She certainly did not exercise the prudent judgment that someone would on a foggy, badly lit night when you know that there's a problem there at that time of night,” he said.

“I think a prudent person, knowing that there's a flood there, would have at least stopped their car, check to see if they can get by and if they didn't inch forward inch at a time,” he added.

Hanson has two other children, who are currently not in her care, and is living with family in Newfoundland.

Mattson said she is undergoing weekly urinalysis tests to prove her sobriety in order to see her children in the future.

He said he believes that Hanson is on the right path to recovery.

“It's very emotional. She was crying today. She had to get herself together. But generally I'm very proud of her because she seems to have found the tools to live with herself which is what we all want.”

Lawyer for Michelle Hanson, Hal Mattson, is seen in this photo after Hanson pleaded guilty in the death of her three-year-old son Hayden Young on Nov. 23, 2021.

Michelle Hanson is seen in this file photo.