Rick Nicholls, the MPP for Chatham-Kent-Leamington, has been expelled from the Ontario Progressive Conservative caucus after refusing to be vaccinated against COVID-19.

Nicholls announced Thursday afternoon at a news conference at Queen's Park that he, together with his wife, made the decision not to get the shot for personal reasons.

"I made the personal decision not to inoculate with the COVID-19 vaccine. I took the premier at his word that vaccination is a choice and that all Ontarians have a constitutional right to make such a choice."

"Like almost two million eligible Ontarians, I choose to exercise this autonomy over my own body while continuing to work hard for the people of Ontario."

In a statement issued Thursday, Premier Doug Ford said elected officials should lead by example and be held to a higher standard. He said Nicholls failed to provide a ‘legitimate reason’ for not getting the COVID-19 vaccine.

“As a consequence, he is no longer a sitting member of the PC caucus and will not be permitted to seek re-election as a PC candidate,” Ford said.

“It is my expectation that every PC caucus member and candidate not only support the role vaccines play in the fight against COVID-19, but also be vaccinated to protect themselves and the people in their community.” 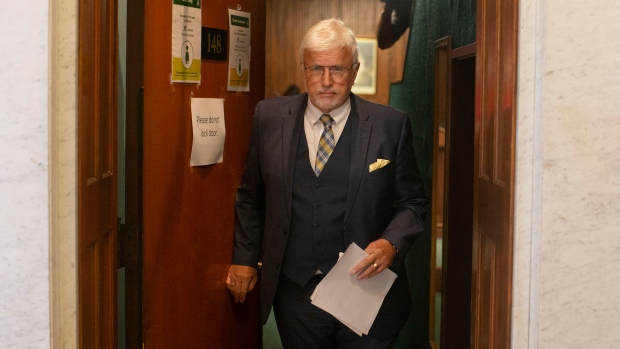 The expulsion means Nicholls will now sit as an independent. He is one of the two remaining members of Premier Doug Ford's party who has not been vaccinated.

Ford said other unvaccinated PC caucus member, Scarborough Centre MPP Christina Mitas, will remain after providing "a statement of medical exemption signed by a physician." The premier added that Mitas has "made assurances she will take additional precautions while carrying out her duties as an elected representative."

PC caucus members had until 5 p.m. Thursday to provide proof of vaccination or a statement of medical exemption signed by a physician or registered nurse.

Failure to provide documents will result in their ejection from the PC party.

An article published in the QP Briefing about the vaccination status of MPPs prompted an emergency caucus conference call on Tuesday morning. During the call, a source told CTV News Toronto that one of the two unvaccinated MPPs spoke about their reasons for being unvaccinated and about the importance of personal choice.

A senior cabinet minister replied in the call that members of the government are held to a higher standard and will fall under greater scrutiny, the source said.

Nicholls claimed Thursday that he was threatened by the manager of the Ontario PC 2022 re-election campaign.

"Unfortunately, in a demeaning tone, this individual threatened that I will be expelled from the Ontario PC caucus if I do not vaccinate by 5 p.m. today," he said. Nicholls did not name the manager.

"I voiced my concerns about our policy privately to the premier and to the Ontario PC caucus," Nicholls said. "But under no circumstances will I nor should any Ontarian be forced or coerced to do something against their will. To do so is an affront to the democratic principles of this magnificent institution."

Nicholls was first elected to the Ontario Legislature in 2011. He currently serves as the government deputy speaker and chair of the committee of the Whole House.

"Up to five o'clock today, I am still a PC caucus member, and I will remain there until I am told otherwise," Nicholls said.

"But in any event, I will continue to serve the people of the great riding of Chatham Kent Leamington where there is no greater honour than to serve one's own community, province and country."

- with files from Chris Herhalt and Colin D’Mello