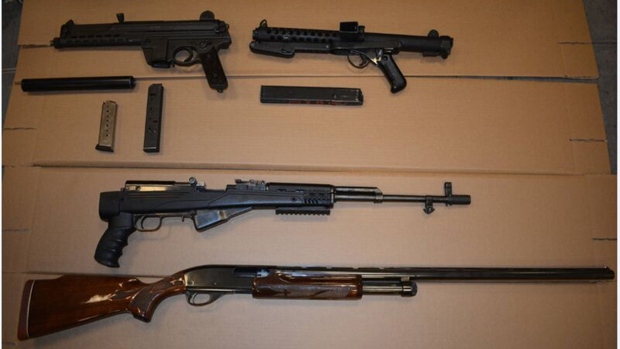 A man and woman are facing a raft of charges after police raided a home in the Stockyards on Saturday and allegedly seized explosives, a submachine gun and a silencer.

Toronto police say a group from the Emergency Task Force and the K9 unit raided a home near St. Clair Avenue West and Old Weston Road at about 7:30 p.m. Saturday.

Inside, they allegedly found a 9mm Sterling Submachine gun with a folding stock, a 7.62mm SKS rifle with a pistol grip, a silencer, a shotgun and one other firearm.

They also seized an unknown quantity of “suspected explosives.”

A 49-year-old man identified by police as Oskar Berrios Juarez, and a 35-year-old woman identified as Jennifer Neira were arrested and charged with 31 offences each.

They include possession of a prohibited or restricted weapon, ten counts of making or possessing an explosive and careless storage of a firearm.

They were remanded and will appear in court again on Monday morning.

Anyone with information about this incident is asked to call police at 416-808-1100.