MUST WATCH: Toronto Zoo begins vaccinating some of its animals against COVID-19 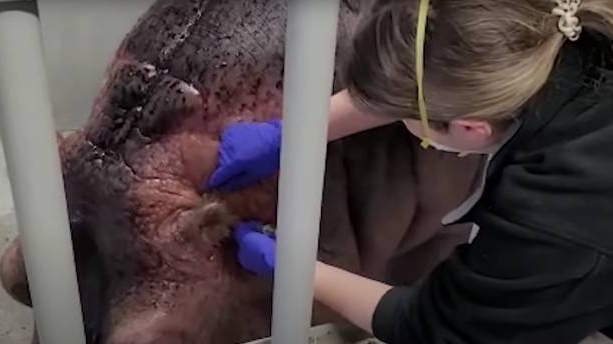 A Toronto Zoo employee is shown vaccinating a hippopotamus against COVID-19. (Toronto Zoo)

The Toronto Zoo has begun vaccinating some of its animals that are most susceptible to contracting COVID-19.

The zoo says that it has received 320 doses of the Zoetis vaccine, which has been developed specifically for use in animals.

It says that about 60 animals have received the vaccine already, with another 60 or so expected to in the days and weeks ahead. The animals will eventually receive two shots with the doses separated by two to three weeks.

“These are voluntary inoculations. The animals choose to come over and interact with the animal care staff and then are delivered the vaccine. Some days they participate. Some days, they don't. So we'll keep working at it until we get all 120 inoculated,” Toronto Zoo CEO Dolf DeJong told CP24 on Thursday afternoon.

DeJong said that the animals slated to receive the vaccine range from “small to large” and include primates, weasels, ferrets, tigers and pigs.

He said that while the zoo hasn’t had any known cases of COVID-19 amongst its animals so far, there will be some relief in being able to vaccinate the ones who are at an elevated risk of contracting the virus.

“This has been such a challenging time for us. We've all been worried about our well-being and our family's well-being, but for your Toronto Zoo, the animals in our care, we have to be their voice and make sure we're taking those steps (to protect them). So we're grateful to have this tool deployed,” he said.

The Toronto Zoo has released a video outlining the process it is using to get the animals vaccinated.

In the video, staff explain how members of the wildlife care team train the animals “to voluntarily present an area of the body for a pretend poke” by rewarding them with a treat.

That same process is then used for the administration of actual shots.

“The animal can walk away at any time, it is completely up to them whether they want to participate or not. Some days are more successful than other days and that is OK. But giving the animals the option to participate in their own healthcare allows us to monitor their health more closely and efficiently without causing any undue stress,” a zoo worker says in the video.