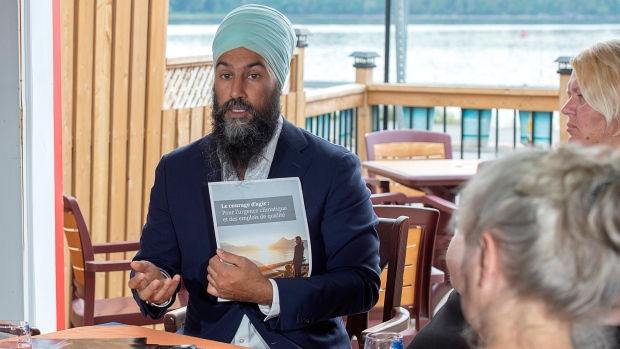 Singh was a guest on the first episode of the 16th season of the popular Quebec talk show, "Tout le monde en parle" (Everybody is talking about it). The show has become an important campaign stop for politicians looking to win the hearts of Quebec's francophone majority.

Show host Guy A. Lepage introduced Singh, a practising Sikh who wears a turban, as the country's "first racialized person" to lead a Canadian political party. Lepage said many people in Quebec and in Canada oppose a leader who wears a religious symbol.

"We share the same values," Singh replied, inside the studios of Radio-Canada in downtown Montreal. After saying he was pro-abortion and wanted equal rights for women and LGBTQ people, he made sure to end his response with a nod to Quebec culture.

"I fell in love with the French language when I was 11 or 12 years old, living in an anglophone city," he said.

Lepage returned with another question about religion, asking whether the NDP leader, if elected prime minister, would support Quebec's controversial Bill 21, which bans some public sector workers such as teachers from wearing religious symbols on the job.

The so-called secularism law, and Quebec's self-proclaimed nationalist provincial government, enjoy wide support among the province's francophones. Premier Francois Legault said the law reflects the will of the French-speaking majority and asked all federal leaders to stay out of court challenges against it.

Singh replied that he "recognized the competency of Quebec in this file," despite the fact he was personally "against laws that divide the population."

"Tout le monde en parle" is a weekly talk show with guests who are mostly newsmakers from Quebec's entertainment, sports and political circles.

Political leaders, whether at the federal, provincial or municipal level, take the show seriously because of its popularity. "Tout le monde" often breaks the one-million viewer mark -- meaning more than 10 per cent of Quebec's total population could be tuning in on any given Sunday.