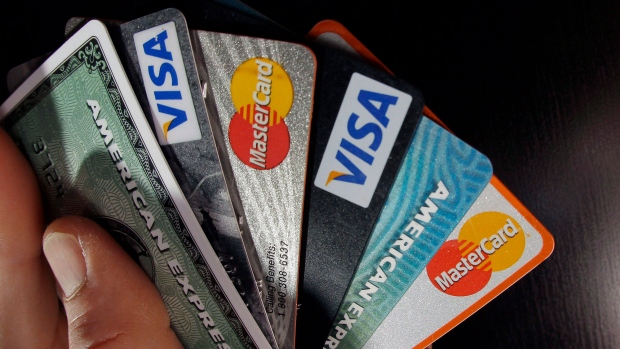 TORONTO -- Nearly one in four customers of the major credit-card companies were unable to make monthly payments this spring, according to a survey released on Thursday by J.D. Power.

J.D. Power's May and June survey of more than 6,700 credit-cardholders also suggested that consumers whose income was dented during the pandemic were generally less satisfied with their credit-card companies.

“While credit card issuers in Canada are faring somewhat better than their U.S. counterparts in averting the negative effects of COVID-19 on customer satisfaction, they are not out of the woods,” said John Cabell, director of banking and payments intelligence at J.D. Power, in a statement.

“Credit card companies are falling behind in key areas related to the customer experience.”

The annual survey - which weighs factors such as benefits, credit-card terms, customer interaction and rewards - comes in the wake of COVID-19 accommodations that allowed some people to defer payments.

Since J.D. Power fielded its survey in May and June, other data have shown that households are now resuming monthly payments that were on hold this summer.

As of the end of July, the average deferral rate for personal loans and credit cards at the Big Six banks fell to 4.3 per cent, down from 9.6 per cent in April, according to RBC, which said that banks deferred payments on nearly 470,000 credit cards.

By August's end, Scotiabank said that credit cards were its smallest source of payment deferrals (compared with auto loans and mortgages,) noting that after deferrals ended, 96.8 per cent of customers remained current on their payments.

But J.D. Power suggested that credit card companies should still consider changing tack amid an uncertain economy. About a third of those surveyed were impressed by their issuer's COVID-19 response, such as decisions to give discounts or waive fees. Overall, respondents favoured Tangerine Bank, American Express and Canadian Tire cards the most.

“Offering discounted airline tickets or free airport lounge access is probably not as lucrative these days for cardholders as, for example, it would be to extend the duration of annual fees,” said Cabell.