New skating trail on track to open under Gardiner by January 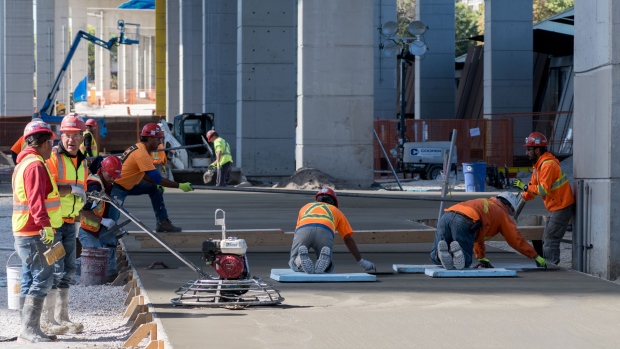 While some will continue to sit in traffic gridlock on the Gardiner Expressway come the new year, others will simply glide underneath it.

This winter, 50 feet below the gridlock and surrounded by soaring columns of concrete, a skating trail is set to open as part of The Bentway development (formerly Project under the Gardiner).

This past weekend, concrete was poured to form the base of the lazy figure-eight trail, sparking excited reaction on social media from those who caught a peak.

“We’re very hopeful subject to weather, subject to construction opportunities along the way, to be opening the rink by the end of this year or certainly by the first week of January,” Julian Sleath, CEO of The Bentway, told CP24.

When it opens, the 250-metre track will snake around the columns under the Gardiner which form giant bays or rooms underneath the highway.

Talks are in the works to add skate rentals, food and beverage vendors and possibly to have skating lessons at the site as well.

“Everyone’s very excited,” Sleath said. “It’s the first phase in the development for The Bentway as a whole and it gives us an opportunity to look at the structure of the Gardiner Expressway in a very different way.”

Remediation work had previously been completed on the section of the Gardiner where The Bentway is located, allowing the space to be further developed starting this past March.

“The first phase of that work was making extensive preparatory upgrades to the infrastructure in the area, including exciting things like new storm drains and grid separators,” Sleath joked.

Electrical conduits and fresh water access have also been added.

However Sleath said that initial work is now allowing an exciting reshaping of the space to begin.

“We took the opportunity of being in this particular section partly because of its immediate adjacency to the Fort York historic site,” he said. “So you have the contrast of urban, gritty, linear public space and the more tranquil calmness of historic Fort York. Coupled with the fact that the Gardiner is 45 to 50 feet above the pathway at this point, it’s very light and airy.”

He said while the space is an unconventional spot for a skating path, “there are a couple of things in our favour.”

“Buried underneath (the concrete) is a network of pipework that will carry a chilled mixture to assist with the setting of good quality ice during the skating season itself,” he said.

That chilled concrete pad should assist in maintaining the ice quality.

“The roof deck of the Gardiner will provide shade from the sun and relieves us from some of the rainwater, which is a challenge on other outdoor rinks.”

Some of the first skaters to test the ice could be area residents, with a community skate planned as a thank you to neighbours who have put up with construction noise.

Sleath said that if all goes well in the next few years, the skating trail could eventually extend all the way to Bathurst Street.