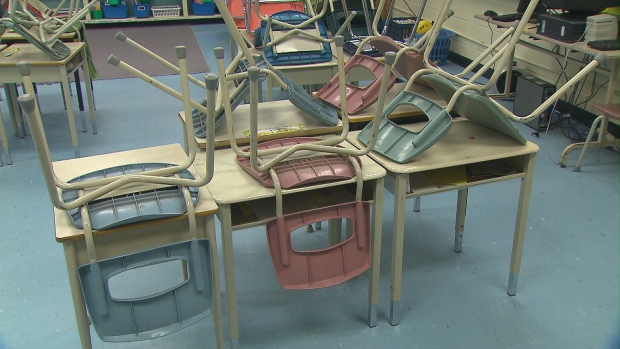 Contracts for all 115,000 Ontario teachers expired last August, and there are no talks scheduled with their unions, said Michael Barrett, president of the school boards' association which negotiates on behalf of the government.

"The September time frame deadline becomes a bargaining chip both in private and in public," Barrett said in an interview. "I've seen this program before."

"Our teacher, occasional teacher and support staff members employed by school boards will be in a legal strike position on Monday," said OSSTF spokesperson Lori Foote. "They will not be participating in extra curriculura activities as of that date."

The Progressive Conservatives warned the Liberals are mistaken if they think the unions will cave in, and said two million students and their parents will have to scramble in September if teachers do strike.

"We know there will be some kind of job action come Sept. 8 when the kids are back in school, wether that's an all-out strike or work-to-rule," said PC education critic Garfield Dunlop. "We can't believe that with only 55 days left that there's not more of a sense of urgency on behalf of the government."

The New Democrats said the government should immediately agree to drop its demand to lift the cap on class sizes so the unions will return to contract talks.

"The Liberals have to take their role in ensuring that negotiations take place and kids have schools to go back to in the fall," said NDP critic Peter Tabuns.

The government admits talks with teachers are at an impasse, but Dunlop said the Liberals have done little to get negotiations back on track.

"Everyone's either at the Pan Am Games, at the cottage or on vacation," he said.

The unions blame class sizes, control over teacher preparation time and hiring practices as the issues that stalled the negotiations.

Barrett said the school boards are ready to return to talks but can't get the teachers' unions back to the table.

"I'm not trying to be disparaging, but it's just not happening," he said.

The union representing 50,000 teachers in Catholic schools says its members will be in a legal strike position by mid-August and will begin enhanced work-to-rule actions on the first day of classes.

Anne Hawkins, president of the Ontario English Catholic Teachers' Association, said the union was frustrated that it hadn't been able to negotiate a new contract, but hasn't decided what strike action it will take if there is no deal by September.

"We have our teachers ready for some kind of job action, and that will be communicated to them in August," said Hawkins.

The Elementary Teachers' Federation, which represents 76,000 teachers in public schools, began a work to rule campaign in May, and said it will return to talks only if the government removes "offensive" proposals such as eliminating the limits on class sizes.

Education Minister Liz Sandals says ETFO's demands alone would cost an additional $3.2 billion, but warns there is no money in the budget for teacher wage hikes.