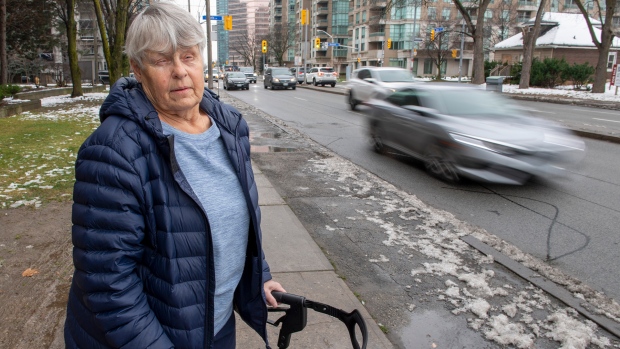 Catherine Riddell, one of the survivors of the van attack, near the attack site in Toronto on Wednesday, November 25, 2020. THE CANADIAN PRESS/Frank Gunn

TORONTO -- Every day virtual court sits, Catherine Riddell wakes up, shakes off the aches, grabs her walker and hops in a cab down to the real courthouse where she steels herself for a long day peering into the mind of the man who tried to kill her.

Court has set up a private room for victims and families of those killed in the Toronto van attack to watch the proceedings that are being held by videoconference due to the pandemic.

Most days Riddell is alone.

But not really, the 70-year-old says, when you consider the two victims services employees she's bonded with, or the helpful court staff. She also feels the love of family, friends and complete strangers - and her 14-year-old cats Kleo and Bootsy.

But she's still struggling to understand why she didn't die that day.

“I'm trying very hard to stay positive because, to me, that's the key to getting back to what you want to be and then really praying that the city will stay positive,” Riddell says.

“I know that it's been very devastating for a lot of people and I'm hoping that they can find the strength to get by.”

Riddell laughs more now, but her journey has been difficult.

She had just left the bank at Yonge Street and Finch Avenue and was walking toward the library at Mel Lastman Square when a van hopped the curb and drove down the busy sidewalk, striking 26 people, killing 10.

Alek Minassian was the man behind the wheel.

Riddell never saw him coming. She was hit from behind and launched into the air, crashing through a transit shelter, glass shards raining down on her.

The crash fractured her spine and broke her ribs, scapula and pelvis. She had massive bruising, internal injuries and a minor brain injury - she had difficulty reading for months afterward as she struggled to focus.

She spent two years rehabilitating, from physiotherapy to hydrotherapy to massage therapy. She was depressed for a time, but counselling helped.

“There were times when I kind of would say to myself, 'you know I wish he'd done a better job of it and then just ended it for me,' and I wouldn't have had to go through all this and everybody would have done their mourning and been through it and moved on with their life,” she says.

“It didn't happen that way, which is a good thing because I'm quite grateful.”

It helps that Riddell remembers nothing of the crash and only recalls snippets of the next two weeks while at St. Michael's hospital.

“At least I don't have those memories to haunt me at night,” she says.

“In the middle of the night when I'm asleep I don't wake up with the image of what occurred. So in that way I feel like I've been spared a lot.”

Two weeks after the attack, when she first became alert, Riddell apologized to her brother for crossing the street, thinking it was her fault she was hit.

That's when she found out she was involved in one of the worst attacks in Canadian history.

Minassian, 28, has admitted in court to planning and carrying out the attack. He has pleaded not guilty to 10 counts of first-degree murder, and 16 counts of attempted murder, arguing he is not criminally responsible for his actions due to autism spectrum disorder.

Riddell avoided news coverage of the attack and did not learn where she was actually hit until a stranger came up to her at the first-year anniversary to tell her he was by her side right after.

She thought she was hit about a 10-minute walk north because that's her last memory.

Two weeks ago came her toughest moment - the first day of trial when the prosecution presented in detail how and where all 26 people were hit.

The prosecution showed a photograph of the shattered bus shelter where Riddell landed.

“It just felt so real that's actually when I felt it the most,” she says.

“It was hard seeing what happened to everybody. I cried my eyes out all day, all night.”

Riddell has worked hard to get to this point, hoping to face the man in the van in person.

Yet Riddell is gaining strength. She worked hard to get to the point to go down to court to face the man in the van.

The days in court are long. She prefers a regular nap.

Up until now, she says, she has not thought much about the man on trial.

But she says she's trying to keep an open mind.

“If he was really incapable then they got to prove it to me,” she says.

Riddell says she often thinks about the other victims who lost their lives in the attack.

“I'm 70 and some of those kids who died are in their twenties,” she says. “So I feel compelled to make the very best opportunity I've been given otherwise I should have been one of the ones who passed away.”