'Not for today,' Trudeau says of discussions to reopen Canada-U.S. border 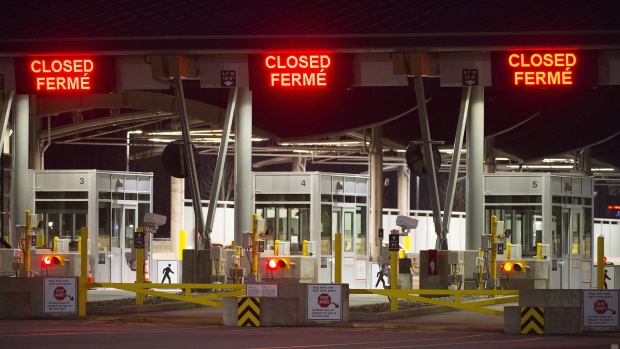 WASHINGTON - Prime Minister Justin Trudeau waved away suggestions Monday that Canada is prepared to explore reopening its shared border with the United States any time soon.

But while that day will inevitably arrive, it's not imminent as long as COVID-19 continues to pose a serious risk to public health, he suggested.

“We're all eager to be able to travel again,” Trudeau said.

“But I think we're all going to wait patiently until such time as the health situation allows us to loosen border restrictions internationally. That'll be eventually, but not for today.”

Trudeau's recent conversations with President Joe Biden and Secretary of State Antony Blinken, coupled with mounting optimism south of the border, have rekindled the debate about letting travel resume.

Just last week, Biden used his first prime-time address as president to float the possibility of allowing small gatherings by the July 4 holiday in the U.S., thanks to ample vaccine stockpiles and redoubled efforts to get them administered.

Biden said he expects to have enough vaccine for every U.S. adult by the end of May, and has ordered states to make all adults eligible for vaccination before May 1.

In Canada, however, where vaccine procurement and distribution has been less successful, government and diplomatic officials - satisfied that the selective restrictions have kept supply chains and the flow of cross-border trade largely intact - are in less of a hurry to lift the restrictions.

That hasn't dampened efforts by some U.S. lawmakers, business leaders and others to start ramping up their campaigns to get international traffic moving again.

New York congressman Brian Higgins, the Democratic chairman of the Congressional Northern Border Caucus, is urging Biden to prioritize a gradual easing of the border restrictions.

“The distance to Canada is now further than it has ever been in my lifetime,” Higgins said in a recent letter to the president.

“Given the economic and social costs the border closure has had on the region, we must prioritize efforts to expand essential-traveller exceptions and plan for an incremental reopening now.”

A congressional delegation from Washington state, led by Democratic congresswoman Suzan DelBene, has also been ramping up the border pressure on Biden, citing the economic impact of the yearlong closure.

DelBene said Canadian visitors made nearly 7 million trips in 2018 into Whatcom County, which borders B.C., spending an estimated US$138 million at local stores and businesses.

She complained about the discretionary approach of some Canada Border Services Agency officers, who in some cases have turned away travellers with a legitimate reason to cross the border.

DelBene cited the specific case of Point Roberts, a Whatcom community just south of Vancouver's Tsawwassen ferry terminal that has been cut off from the mainland for the last year.

Point Roberts residents “need to cross through Canada to reach the mainland United States for almost anything essential to the daily functioning of their lives,” she wrote in a separate letter to Biden.

She wants the White House to prioritize a bilateral plan to restore travel that would include vaccinating and testing border guards, creating exceptions for family members and property owners and letting students who live on one side return to classes on the other.

The Wilson Center, a D.C.-based public policy think tank, has assembled a high-powered task force to examine the challenges inherent in both limiting cross-border travel and deciding how and when to lift those limits.

The task force is expected to issue preliminary findings on the economic impact of the closure on Thursday.

This report by The Canadian Press was first published March 15, 2021.