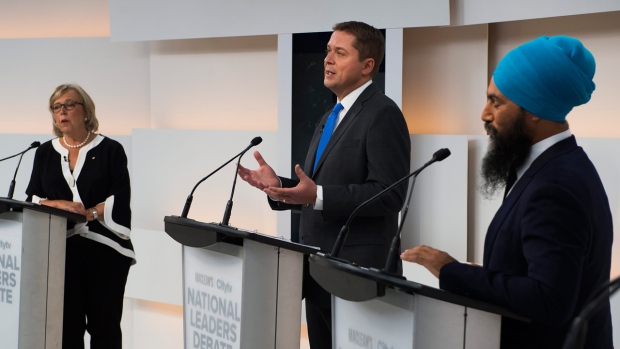 Here’s a different way of looking at Thursday night’s debate. It’s a rehearsal for two debate rookies. Conservative leader, Andrew Scheer and NDP leader Jagmeet Singh hit a federal debate stage for the first time. Elizabeth May joined them. May has done a couple of debates but not a full on national TV debate like the one coming up on October 7.

The debate stage had Scheer in the middle with May to his right and Singh to his left. Scheer looked serious, very serious, waiting for his turn. The nerves showed in the first segment on the economy. All three rushed to try to make points talking over each other.  It forced the moderator, Paul Wells, to try warn all three he would rein them in if the cross talk continued. It got better for a while and then the rush to make their points led to exchanges that forced Wells to intervene again.

What I heard was a confident Jagmeet Singh focusing on the challenges average Canadians face and outlining specific promises. Those promises would be enormously expensive. For example his promises to deliver on free pharmacare and free dental care sound good but Elizabeth May pointed out her party decided free dental care for all was too expensive a commitment.

Andrew Scheer promised to increase health and education spending but there was not one specific program from him.  And he repeatedly came back to the need to bring the debt under control. Promising to keep the debt under control didn’t earn Stephen Harper a win in 2015. Canadians will be waiting to hear Scheer’s economic program fleshed out with real programs in the coming weeks.

Elizabeth May was, of course, very strong on the need for action on climate change but she wanted to make sure that viewers heard the other Green Party programs.  At the end of the debate she almost begged voters to consider the full Green Party platform repeating some of the non-environmental programs her party supports.

With the debate out of the way it’s back to the leader tours. NDP leader will be in Toronto Friday morning. Andrew Scheer will also be in the GTA.  Elizabeth May will be doing media interviews in Toronto. And the no show, Justin Trudeau, will start his day in Trois-Rivières for his first crack at winning votes in Quebec.