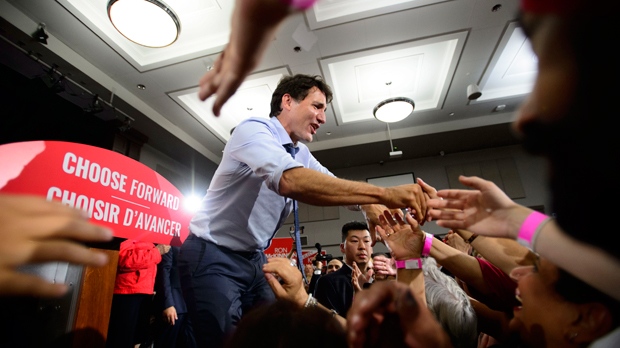 Liberal Leader Justin Trudeau greets the crowd during a campaign stop in Vancouver on Wednesday, Sept. 11, 2019. THE CANADIAN PRESS/Sean Kilpatrick

Can a newspaper headline derail a campaign launch? The Globe and Mail on Wednesday morning’s headline “Ottawa blocks RCMP on SNC-Lavalin Inquiry,” was a must read. That headline had Conservative and Liberal campaign strategists up early.

The Conservative Party war room saw an opportunity to get on TV first and added an early Ottawa airport scrum for Andrew Scheer to attack Trudeau. Scheer said Trudeau has “lost the moral authority to govern.” It meant Justin Trudeau would face questions on the Globe and Mail story and Scheer’s comments. After taking his time to leave Rideau Hall Trudeau made his “Choose Tomorrow” pitch and then answered the SNC-Lavalin questions. His response? Trudeau kept his answers short, very short, and tried to deflect the issue maintaining it was a decision made by the Privy Council.

But once the reporters ran out of ethics questions Trudeau was able to get back to his “Choose Forward” message. The Trudeau pitch is to keep Canada “moving forward or go back to the Harper years.” Trudeau pointed to Canada’s positive economic numbers and reminded Canadians that Liberal tax cuts have put more money in their pockets.  Brian Topp, who managed the NDP campaigns of Jack Layton, pointed out that Trudeau did not make a compelling case for why to vote for another Liberal mandate. Trudeau then headed to the airport and flew out west to campaign in British Columbia. That Liberal sell might come in Vancouver when the Liberal’s unveil the Trudeau stump speech at a rally tonight.

Conservative leader Andrew Scheer went to Trois Rivieres to make his first stump speech to Quebeckers. The Bloc Quebecois will be a factor in Quebec. The party has a new leader, Yves-Francois Blanchet, and its popularity in Quebec is once again on the rise. How well it does on Oct. 21 could impact on all the federal parties. Scheer singled the Bloc out and said “the Bloc cannot replace” the Trudeau government.  He said the Bloc can only be “spectators” in the House of Commons and only a vote for the Conservatives will defeat Trudeau. Scheer ended his day north of Toronto in Vaughan for a rally and his first pitch to the all-important GTA voter.

The other parties fell in behind the two front runners. The NDP sent its leader Jagmeet Singh to London, Ont. In a small room filled with supporters Singh ran down a long list of promises including better health care, free pharmacare and free dental care. His spotlight on progressive social programs will be front and centre as he tries to make a positive impression on Canadian voters in his first campaign.

In Victoria, Elizabeth May, the Green Party leader, waited more than two hours to get her moment in front of the cameras. May had the most energy of all the leaders and tossed out a couple of good lines like “first and foremost we are earthlings.” But can May be more than a one issue candidate even if that issue, climate action, is the one that most Canadians say they want dealt with?

That brings me to Maxime Bernier. Bernier founded the People’s Party after losing his bid to be the leader of the Conservative Party. Wednesday, Bernier came to CP24 to talk about his party. Bernier said “people are looking for the truth and not any political correctness.” Bernier said the other parties all have the same immigration policy. “It’s always more and more and more,” immigrants Bernier said. He went on to say that “the climate change emergency for me doesn’t exist.” Bernier’s party is very close to having a full slate of candidates across the country. So far his message has not attracted support. On Monday the federal debate commission will announce if Bernier will be invited to the main TV debates in English and French. Bernier needs that platform to get his message out.

By the end of the day that Globe headline had already been lost in the flurry of political campaign sound bites. Andrew Scheer will come back to it tomorrow in the first TV debate but Justin Trudeau will be thousands of kilometers from that debate stage.