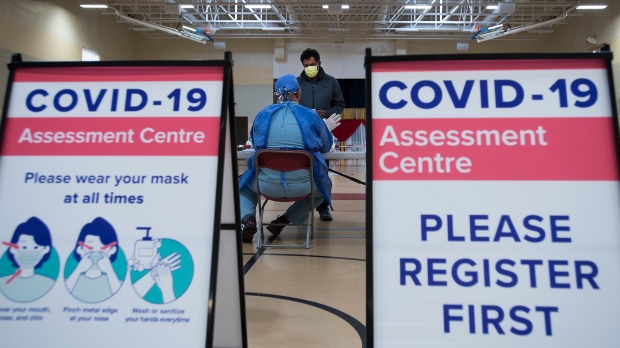 Muhammad Junayed, centre back, gets instructions for being tested for COVID-19 from a health care worker at a pop-up testing centre at the Islamic Institute of Toronto during the COVID-19 pandemic in Scarborough, Ont., on Friday, May 29, 2020. THE CANADIAN PRESS/Nathan Denette

For the first time in more than four months, Ontario reported fewer than 100 new cases of COVID-19.

Provincial health officials say 76 new cases of the virus were reported today, down from 111 one day prior.

It should be noted that the case positivity rate is substantially lower now than in March, as testing capacity was limited to about 2,500 per day at that time.

More than 27,000 tests were completed over the past 24 hours, resulting in a case positivity rate of just 0.28 per cent. More than 18,000 cases are still under investigation.

According to the latest data, 28 regions in the province reported five or fewer new cases today and with 174 more resolved cases, recoveries outpaced new infections by 98.

"We can't take our eye off the ball for a second. It will come back and bite us in the backside, this second wave, like we've never seen before. So by no means is this over," he said at Queen's Park on Wednesday afternoon.

"I emphasize, do no, do not have parties. Do not have these big gatherings because we are risking everything."

Of the new cases reported today, 39 were in patients ages 39 and under while 35 were in people 40 and older, a departure from a developing trend that saw new cases spiking in people under 40.

The highest number of new infections were reported in Windsor-Essex (22), Niagara Region (13), Chatham-Kent (10) and York Region (9).

In today's epidemiological summary, the province said several cases that were initially reported as positive in Toronto were actually negative and were subtracted from Wednesday's number, resulting in a total of -13 today.

The encouraging numbers come on the same day the Ontario government gave Toronto and Peel the green light to advance to Stage 3, allowing many additional businesses to reopen and indoor dining to resume on Friday.

"While more restaurants, theatres and businesses can hang up their Open for Business sign, we're asking everyone to follow public health advice and act responsibly," Ford said in a press release issued on Wednesday.

"We have made tremendous progress that allows us to return to something a little closer to our normal lives this summer, but we are not out of the woods yet."

Windsor-Essex is the only region that remains in Stage 2.

One additional death was reported in the province today, bringing the total number of virus-related deaths in Ontario to 2,769.

The total number of lab-confirmed cases of COVID-19 in Ontario now sits at 38,986 and with 34,741 cases considered to be resolved, the number of active infections is down to 1,476.

Hospitalizations also continue to decline in the province.

Officials say 91 patients are currently in hospital with COVID-19 and of those, 28 are in intensive care and 17 are on ventilators.

One new outbreak was reported at a long-term care home in the province, bringing the number of active outbreaks in those facilities to 33.