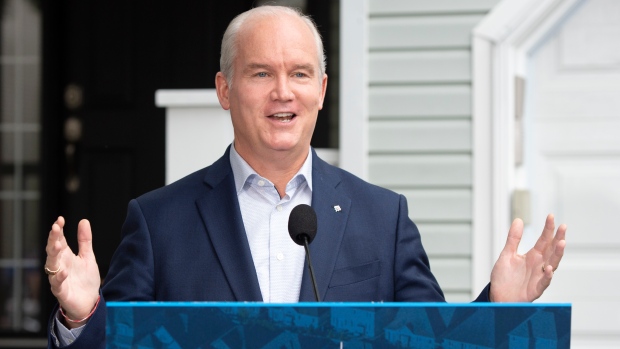 OTTAWA -- A Conservative government would respond to the needs of Canada's LGBTQ community -- including on the issue of "poppers" -- says Erin O'Toole, despite skepticism from Justin Trudeau on the Tory leader's commitment to queer priorities.

The recreational drug, a muscle relaxant used largely by men who have sex with men, requires a prescription and circulates in the grey market due to its limited availability, potentially jeopardizing users' safety.

Conservative MP Michelle Rempel Garner recently sent a letter asking the federal health minister to study the benefits and harms of alkyl nitrites -- the official name for poppers -- amid a lack of attention that the lawmaker attributes to stigmatization of LGBTQ health care.

At a campaign stop in Ottawa, O'Toole said Tories will advocate for LGBTQ community members, including through requests to Health Canada, with an eye to creating a safer supply.

"I want members of the LGBT community to know if they want something looked at, if they're advocating for an issue -- as Michelle has, as I have, as other members of our caucus have -- we want to make sure that a federal government is responsive to the needs of all Canadians in all communities," O'Toole told reporters Thursday.

"We will advocate, including asking for Health Canada to examine issues of concern to the LGBT community."

O'Toole repeated his criticism of Liberal Leader Justin Trudeau's "broken promise" to end a discriminatory policy that prevents many gay and bisexual men from donating blood.

Canada introduced a lifetime ban for gay men in 1992 and in 2013 changed it so blood would be accepted from a man who abstained from sex with another man for at least five years.

The waiting period then dropped to one year and became three months in 2019.

Recently, Canadian Blood Services said that by the end of 2021, it would recommend to Health Canada that it remove the waiting period and bring in screening for all donors based on sexual behaviour.

Trudeau has acknowledged ending the blood ban was a Liberal platform plank dating back to 2015, reiterating Thursday that the federal government is committed to realizing that goal.

"We recognize that Canadian Blood Services is independent from government, but we can give them the tools to be able to do it and that's what we've been working on," the Liberal leader said in Victoria.

Trudeau also sought to draw a line between Liberals and Conservatives on conversion therapy.

"It is not right for anyone to be told that they are broken or imperfect or there's something wrong with them," he said.

"It is going to be an absolute priority for us if we get re-elected. And unfortunately, we do have to highlight the contrast of the fact that there is a party out there (whose) members majoritively voted against banning conversion therapy."

A bill to ban LGBTQ conversion therapy that the Liberals introduced late in the spring sitting faced pushback from some Tory legislators, providing an opening for the Liberals to exploit after 62 of 119 Conservative MPs voted against the legislation.

The Tory platform unveiled this week states: "Conservatives have been clear in our opposition to conversion therapy and attempts to forcibly change a person's sexual orientation."

Len Tooley, a director at the Community-Based Research Centre, said he was "pleased" to hear O'Toole's pledge on poppers.

A crackdown by the department on the sale of non-prescription alkyl nitrites starting in 2013 drove the market underground, he said.

"The truth is that that did not impact the level of the use of poppers. What it did was create an unsafe supply where people don't know the type or quality of the product that they're getting."

That risk carried personal consequences for Tooley, who started suffering from a type of vision loss called retinal atrophy that he linked back to a particular chemical compound in some poppers.

About one in three Canadian men surveyed in an annual report by his Vancouver-based centre said they had used the drug in the previous six months.

Health Canada has pointed to difficulties users might have controlling how much of the drug they inhale, potentially leading to overdose, particularly for users with certain medical conditions.

The Conservative platform views addition and the opioids epidemic "as the health issue that it is." Police should focus on traffickers and the government's "overarching goal" should be recovery, it states.

"The last thing that those suffering from addiction should have to worry about is being arrested," the policy reads, pledging to revise Ottawa's substance abuse policy framework.

"They're saying some of the right words in that policy."

Nonetheless, a focus on recovery and abstinence is "misplaced" as it misidentifies the crux of the crisis, Mullins said.

"Recovery is a lovely idea, but we need triage right now."

Health Canada is currently working with Vancouver on the city's request for exemption from criminal provisions on simple possession of small amounts of drugs.

Vancouver has been the epicentre of an opioid crisis that saw B.C. record 1,176 illicit drug overdose deaths in 2020 -- the highest ever in a single year -- and more than 7,000 deaths since a public health emergency was declared in April 2016.

This report by The Canadian Press was first published Aug. 19, 2021.