A west-end high school that was the site of a massive six-alarm fire on Tuesday sustained “extensive” smoke and water damage but the structure itself is likely salvageable, officials say.

The blaze at York Memorial Collegiate Institute was first detected at around 3:30 a.m. on Tuesday morning; just hours after crews were called to the school for a three-alarm fire that was later contained.

At one point there were about 150 firefighters on scene battling the blaze from a defensive position but by Wednesday morning the flames had been knocked down and fewer than a dozen firefighters remained.

“We are just helping out the Office of the Ontario Fire Marshal and trying to hit some of the hot sports that they are pulling out but as far as we are concerned this fire is out,” District Chief Steve Darling told reporters at the scene.

Darling said that the main body of the fire was mostly contained to an auditorium, though he said that there is water and smoke damage throughout the building.

He said that it could take a week just to get the water out of the basement of the 90-year-old building, which is “right up to the first floor.”

Parts of the roof are also compromised and will need to be rebuilt, he said.

“We talked to the engineer and he thinks most of the building can be salvaged,” he said. “That is an initial assessment. We are going to have engineers coming in as well afterwards to do a more comprehensive analysis of the structure of the building and the integrity.”

The cause of the fire remains unclear, though Darling said that the investigation is largely focused on a boiler room.

He said that while crews were called to the school for a fire on Monday, it is too early to say whether it may be connected to the fire that broke out in the early hours of Tuesday.

“We haven’t even been in there to do any investigation so we will have to leave that to the OFM (Ontario Fire Marshal),” he said.

Classes were cancelled Wednesday for all students from York Memorial C.I., as well as nearby George Harvey Collegiate Institute, which closed yesterday due to smoke from the fire.

The TDSB says that students from York Memorial C.I will finish their year at George Harvey Collegiate Institute, though they say that the school will be closed for the rest of the week to give staff time to prepare.

The decision follows air quality testing through the night, the TDSB said.

“Social Work staff will be at Oakwood CI to support students & staff as needed,” the TDSB said in a tweet.

On Tuesday, plumes of heavy smoke from the six-alarm fire forced school closures and home evacuations as it wafted over the area.

Residents were allowed to return to their homes in the evening as smoke conditions improved.

On Wednesday former MP Alan Tonks, who is an alumnus of York Memorial, announced an online fundraising campaign to raise funds to preserve the school’s heritage.

“We’re not sure where the future lies,” Tonks said. “It’s very early on, but we want to start the planning to preserve the heritage of York Memorial going forward.”

He noted that the original designs for the school’s stained glass windows still exist and restoring them could be part of the effort.

While Tonks said he and his father wanted to get the fundraising effort started now, he said the focus at the moment is still very much on getting students back to school.

He said the school board is doing “a lot of heavy lifting” to figure out how to get students back to class and organizing a plan for them going forward.

He said AP exams have been delayed for affected students and the board is working to make sure that graduating students have no problems in their transition to university.

“We don’t want any delay in respect of any kids graduating this year,” Tonks said.

The massive fire struck just weeks before a celebration to mark the 90th anniversary of the school. It’s not yet clear if the May 25 celebration will go ahead.

The cause of the fire remains under investigation by Toronto Fire, the Ontario Fire Marshal’s Office and Toronto police.

Police have said they are concerned that the fire may be suspicious, but the exact cause has not yet been pinpointed. 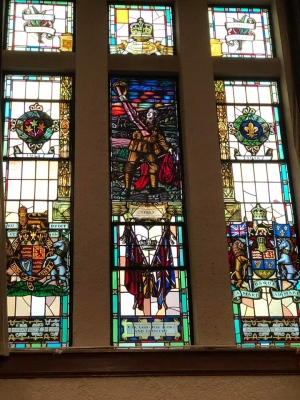 Before the fire: York Memorial C.I.

Soot and water is shown on the floor of a gym inside York Memorial Collegiate Institute following a six-alarm fire.

Fire crews use heavy equipment to get at the remains of a stubborn fire at York Memorial Collegiate Institute Wednesday May 8, 2019. (Cristina Tenaglia /CP24)

Fire crews remain at the scene of a blaze at York Memorial Collegiate Institute Wednesday May 8, 2019.