‘Onion' style ‘Pickle’ pokes fun at life in the Beach 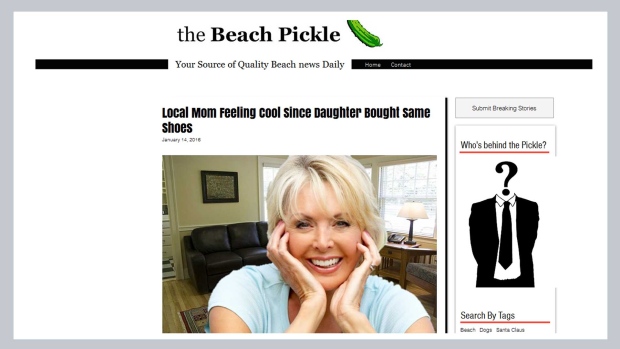 A Screen grab from "The Beach Pickle" is shown.

The Internet just got a little funnier for residents of the Beach.

While the masses have 'The Onion' for humour, Beach residents now have their very own pickle, “The Beach Pickle” to be exact.

Live for less than week now, the satirical website has been posting fake news stories aimed at showcasing the lighter side of life in one of the city’s proudest neighbourhoods.

Reached by phone, one of the co-editors told CP24.com he and the other writers prefer to remain anonymous for now so that they can continue to feel comfortable to write freely.

Going by ‘Dill,’ the 22-year-old Western grad says the Beach is fertile ground for a satire publication because the neighbourhood spirit is so strong.

“It’s almost like a university with the amount of spirit in the neighbourhood – it’s crazy,” he says.

He points to sweatshirts commonly worn by area residents that proudly have ‘The Beach’ spelled out in varsity-style lettering.

That makes it easy, Dill says, to lampoon local high schools such as Malvern and to poke fun at local sensibilities in a shared language.

He says he and his co-editors all grew up in the Beach and were inspired by their experiences, as well as a local burrito shop.

“If you go to Burrito Bandidos at Coxwell and Queen, they have ‘The Onion’ articles plastered all over the place. My friends and I saw some of those articles and I thought it would be funny to make one of those for The Beaches and they laughed.

“I thought we could do a good job making something similar for The Beach.”

Posting stories contributed by friends and other Beach residents, the site went live in mid-January and the editors started pumping content onto the Facebook page.

So far, the response has been steady.

“The post reach for the amount of people who have seen the articles is 13,000,” Dill says.

Though not everyone has immediately understood that the site is satire – Dill says some readers were particularly incensed at the story about the trendy store immediately closing – the overall response has been positive.

“Most people do (understand),” he says. “I think most people reading it find those comments that are really serious and angry in nature, they find that the funniest.”

While he doesn’t expect to quit his day job anytime soon (he says the site is a labour of love for fun), Dill says he is hopeful that ‘The Beach Pickle’ will find its place as a regular part of the local culture.

As for any hopes for a broader reach, he says the Pickle is happy to stay local.

“Part of me would hope that everyone likes it, but then again we’re not trying to compete with ‘The Onion’ or something,’” Dill says. “It’s best I think is if it’s relevant just for the neighbourhood, and if other people like it too, then I guess that’s great.”