Ontarians confidence in healthcare system has deteriorated as COVID-19 outbreak has worsened: poll 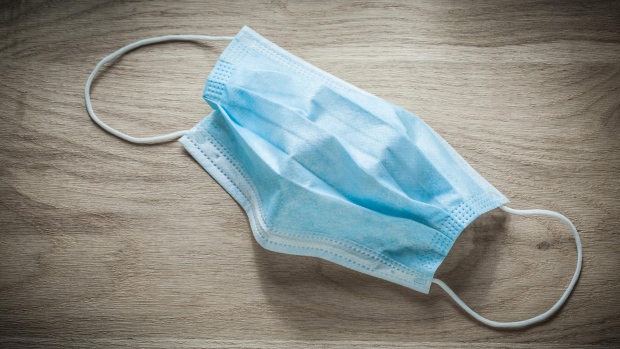 As the COVID-19 outbreak has worsened in Ontario, public confidence in the healthcare system’s ability to handle a potential surge in cases has rapidly deteriorated, according to a new poll.

The Angus Reid Institute survey found that just 47 per cent of Ontarians are now confident that the health care system is prepared to deal with the expected new cases compared to 48 per cent who said that they were not confident. The remaining five per cent of respondents said they weren’t sure.

The percentage of Ontarians expressing confidence in the healthcare system’s ability to respond to the pandemic was down 22 per cent from a poll in early February when the number of cases of COVID-19 locally was still low and the global spread of the virus hadn’t fully taken hold.

The trend has been felt across the county, but particularly so in harder hit regions like Ontario and British Columbia, where confidence in the healthcare system is down to 46 per cent from 62 per cent in early February.

Nationally, 53 per cent of Canadians expressed confidence in their local healthcare system’s ability to respond to the crisis (down 10 per cent from February).

The decline in confidence levels comes amid widespread reports of Personal Protective Equipment (PPE) shortages at hospitals south of the border, where there are now more than 69,000 confirmed cases of COVID-19. Hospitals locally are also preparing for a shortage of needed equipment with PPE drives now underway at both the Scarborough Health Network and Michael Garron Hospital. 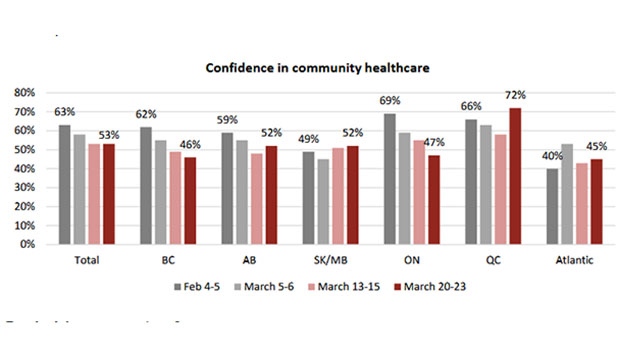 Interestingly, the confidence that Canadians have in their provincial government’s ability to handle the crisis has increased from coast-to-coast as most premiers have taken drastic measures to restrict public life and limit the spread of the virus.

In Ontario, 74 per cent of respondents said that Premier Doug Ford’s government was doing either a good job or very good job, up 28 points from early February. That trails only the province of Quebec, where there was a 33-point jump in public confidence.

The survey also suggests that residents across Canada, but particularly in Ontario, are listening to the pleas from public health officials to practice “physical distancing.”

The numbers are drastically different from those recorded in a poll on March 13-15, when restrictive measures to limit large crowds from gathering were just starting to be introduced. Back then, only 48 per cent of respondents said that they were staying away from public places and only 52 per cent said that they were trying to keep their distance from other people. Perhaps not surprisingly, the increase in precautions being taken accompanies a rise in anxiety around COVID-19.

Back in early February, 69 per cent of Canadians felt that the threat posed by COVID-19 was overblown but now just 12 per cent believe that. 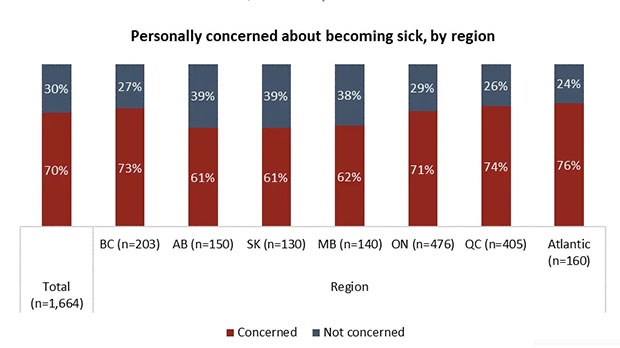 “The aggressive spread of this coronavirus is sending anxiety levels spiking as Canadians come to grip with the financial toll it will take on their households and job situations,” a release accompanying the poll states. “It is also softening their level of confidence in local health care systems to cope with what public health officials warn will be an onslaught of new cases in the coming weeks.”

The Angus Reid survey was conducted March 20-23 and is based on responses from 1,664 Canadian who are members of an online panel. It is considered accurate to within 2.5 percentage points, 19 times out of 20.