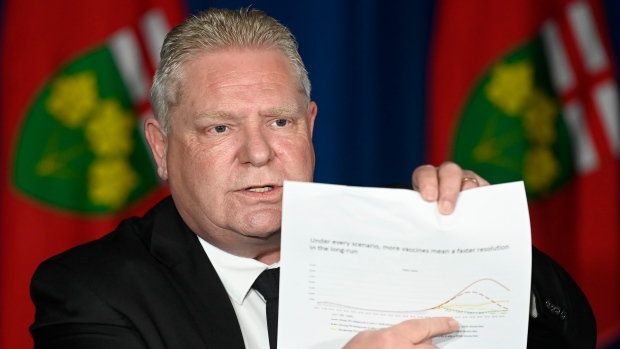 Ontario Premier Doug Ford points on a COVID-19 caseload projection model graph during a press conference at Queen's Park, in Toronto, Friday, April 16, 2021. Ontario is extending its stay-at-home order to six weeks, restricting interprovincial travel and limiting outdoor gatherings in an effort to fight a losing battle with COVID-19. THE CANADIAN PRESS/Frank Gunn

More than two-thirds of Ontarians disapprove of the job Premier Doug Ford is doing handling the pandemic and a plurality of residents now believe that his government should shoulder most of the blame for the devastating third wave that has brought our healthcare system to the brink of collapse, according to a new poll.

Back in the first wave of the pandemic last spring 78 per cent of Ontarians told Angus Reid that Ford was doing a good job handling the pandemic but since then his approval rating has fallen steadily in lockstep with other Canadian premiers.

The latest poll conducted by Angus Reid earlier this week reveals that just 31 per cent of Ontarians now approve of Ford’s handling of the pandemic.

The poll was conducted after Ford came under fire for closing playgrounds and handing police sweeping new powers to arbitrarily stop and question people, decisions he has since apologized for.

“We moved fast to put in measures in place to reduce mobility. But we moved too fast. And I know that some of those measures, especially around enforcement, they went too far,” Ford said on Thursday. “Simply put, we got it wrong. We made a mistake.”

The latest poll from Angus Reid found that 43 per cent of respondents place the blame for the third wave solely at the feet of Ford’s government compared to 32 per cent who blame the province and the federal government equally and 23 per cent who think it is mostly the fault of Prime Minister Justin Trudeau’s government.

The proportion of Ontarians that mostly blame the provincial government for the current situation was at least 10 points higher than it was in residents in every other province.

Ontarians were also more likely than residents in any other Canadian provinces to believe that the third wave could have been prevented with 69 per cent of respondents sharing that viewpoint.

Canada-wide, only 58 per cent of residents believed this wave could have been prevented while 32 per cent conceded that it was probably inevitable.

Meanwhile, the poll reveals that nearly half of Ontarians (48 per cent) do not believe the current restrictions to curb the spread of COVID go far enough while nearly a third (32 per cent) think they go too far. About one in five Ontarians believe the restrictions that are in place are adequate.

In Atlantic Canada, which has had the lowest levels of COVID-19 transmission in the country, about 55 per cent of residents believe the current restrictions are adequate and 33 per cent think they don’t go far enough.

The Angus Reid poll is considered accurate to within 2.5 percentage points, 19 times out of 20.