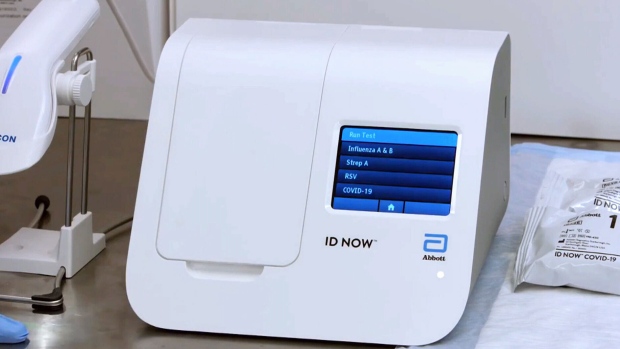 The Ontario government has started to deploy rapid COVID-19 tests to hospitals, long-term care homes and regions of high-transmission as the province continues to combat a second wave of the novel coronavirus.

Premier Doug Ford along with his health minister and minister of long-term care made the announcement in Toronto Tuesday afternoon.

So far, the government has received roughly 98,000 ID NOW rapid tests and 1.2 million Panbio rapid antigen tests with another 1.5 million more Panbio tests expected by the end of November.

“The new rapid tests are game changers,” Ford said during an announcement at Humber River Hospital in Toronto on Tuesday. “These new tests can turnaround test results in minutes instead of days.”

Ford said both tests can provide results in under twenty minutes.

“I want to thank Health Canada for getting these in and then once it gets in, put them in the distribution center and we allocate it to the most vulnerable areas throughout Ontario, no matter if it's northern rural areas, or the long-term care homes,” Ford said.

The ID NOW tests are initially being used in hospitals and assessment centres in rural and remote communities, and to test people as part of early outbreak investigations in hot spot regions.

Ford commented on the significance of these rapid tests in the health-care system as infections are on the rise across the province, particularly in the hot spots of Toronto and Peel Region, which both entered the “lockdown” zone of the government’s COVID-19 response framework on Monday.

“Over the next few weeks dozens of our long-term care homes will use these tests to test staff and visitors to keep our long-term care residents safe while ensuring essential caregivers can continue to visit and worry less about endangering their loved ones,” Ford said.

ID NOW tests are currently being distributed in Simcoe Muskoka, Southwestern Ontario and Eastern Ontario. The government says the program will be expanded to other areas of the province next month.

Meanwhile, the Panbio rapid tests will support a screening program for long-term care homes and other workplaces.

The government says the Panbio tests have already been deployed to six long-term care operators for potential roll out to more than 30 long-term care homes, 27 retirement homes, eight hospitals and 11 industry partners, including Ontario Power Generation, Air Canada and Magna.

The Panbio rapid tests will also be used in an eight-week pilot for participating employers in the private, public and non-profit sectors.

“This pilot program is an important opportunity to learn about the value of antigen screening for asymptomatic workers in a range of workplace settings, and will inform future decisions about safely and fully reopening the economy,” Elliott said.

The deployment of rapid tests comes as the province reported 1,009 new COVID-19 tests on Tuesday. But the Ministry of Health says the new infections reported today are an underestimate and the 1,589 cases reported on Monday are an overestimate due to technical issues with data collection.

When averaging out new infections reported over the last two days, Ontario saw 1,299 cases on both Monday and Tuesday. The rolling seven-day average of new cases is now 1,395, down from 1,421 a week ago.

The government did not say if it has plans to roll out rapid tests to schools across the province even though cases continue to climb in school and child care settings.

On Tuesday, public health officials reported 270 new cases of the virus in Ontario schools. However, a spokesperson for the minister of education said the latest data is "a reflection of over three days of data and includes any cases identified in schools on Friday from 2 p.m., Saturday, Sunday and Monday until 2 p.m." It also includes cases from some boards that did not report to the ministry on Friday due to a P.D. day.

On Monday, more than 37,400 tests were completed by provincial health officials, with an average of 32,285 tests processed on both Monday and Tuesday, well below the province's goal of 50,000 tests per day.

Ontario Premier Doug Ford, visibly upset, listens to questions about a disturbing report from the Canadian military regarding five Ontario long-term-care homes during his daily updates regarding COVID-19 at Queen's Park in Toronto on Tuesday, May 26, 2020. THE CANADIAN PRESS/Nathan Denette