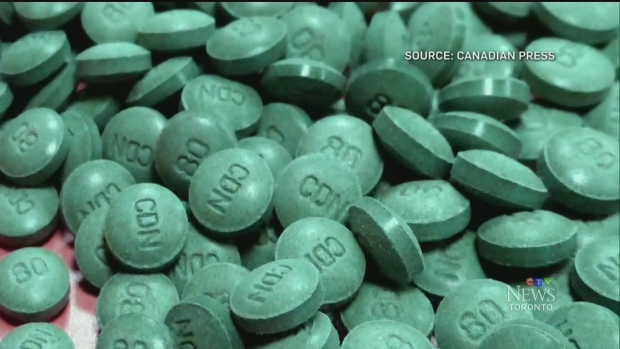 Fentanyl is shown in a file photo.

TORONTO - Ontario is putting an additional $222 million over three years toward fighting an opioid crisis that the government said claimed the lives of 865 people in the province last year.

Health Minister Eric Hoskins made the announcement in Toronto on Tuesday, as the province released the latest figures on opioid deaths.

“This is a national crisis comprised of literally thousands of individual tragedies,” Hoskins said. “Each life lost represents a valued individual.”

More than 700 doctors, nurses, harm reduction workers and academics called on the province this week to declare opioid deaths and overdoses a public health emergency, as British Columbia did last year. They say limited resources and poor data are preventing them from responding properly to a disturbing and sustained increase in overdoses.

The funding announced Tuesday brings the province's total commitment to fighting the opioid crisis to $280 million over three years.

The funding includes $20 million to expand the supply of the overdose-reversing drug naloxone to at-risk people by distributing it through emergency departments.

“Similar to now in all of our correctional facilities, naloxone is made available, offered, for inmates upon discharge, so it will be a policy...that ERs make naloxone available in a similar fashion,” Hoskins said.

The funding also includes $70 million to expand access to treatment and community-based withdrawal management services and addictions programs, and the expansion of rapid access addiction medicine clinics across the province, as well as $10 million to add more front-line harm-reduction workers.

She said her heart broke at hearing the total number of opioid deaths for 2016 announced Tuesday.

“I know many of those people that are dead,” she said. “We knew the numbers were increasing. We were saying that consistently. We know it because when we look around us, people we know and work with are dead.”

Until Tuesday, the only available provincial data on total opioid deaths in Ontario was up to June 2016. Ontario's chief coroner said he hopes that by the end of this year reporting will happen much more quickly.

“Sometimes when I say the words data and I talk about numbers it really takes away from the individual people and I really want to bring back to recognize that it's not all about numbers,” said Dr. Dirk Huyer. “The information is very valuable though, because it helps us to inform the approaches that we take.”

The funding includes $1.2 million to improve data collection and monitoring.

It also includes $12 million for Indigenous-specific care, $8 million for youth-specific services, $7.6 million to partner with the Centre for Addiction and Mental Health to expand addiction treatment provided by family health teams, $15 million to support healthcare providers on appropriate pain management and opioid prescribing and $23 million to both support and expand existing harm reduction programs such as needle exchanges and supervised injection services.

There are three supervised injection sites coming to Toronto and one to Ottawa, with temporary sanctioned and unsanctioned sites popping up in the meantime.