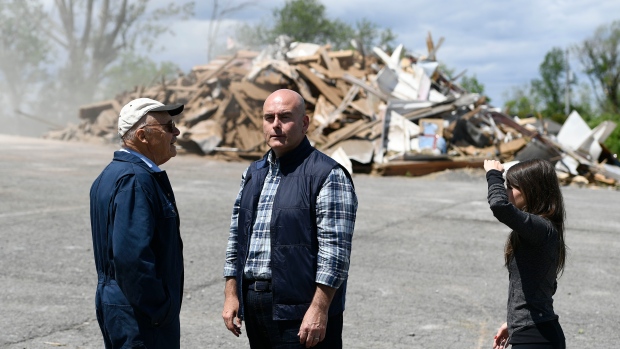 Ontario Liberal Party Leader Steven Del Duca, centre, speaks with resident and former MP Don Boudria as he visits Paroisse Saint-Hugues, which lost its steeple during a major storm with Liberal candidate for Glengarry–Prescott–Russell Amanda Simard, in Sarsfield, Ont., on Monday, May 23, 2022. THE CANADIAN PRESS/Justin Tang

Mike Schreiner, the leader of the Green party in Ontario, is still under COVID protocols. Schreiner told reporters he hopes to resume full campaigning in the Ontario election sometime this week but he didn’t get any more specific. The leader of the Green Party in Prince Edward Island, Peter Bevan-Baker, came to Ontario to help the Green campaign. The Green Party is the official opposition in PEI and Bevan-Baker made the case today for Ontario to elect more Green MPPs.

The Greens believe the best shot at a second seat is in Parry Sound-Muskoka. Matt Richter is running for the fourth time in what has been a solid Progressive Conservative riding for decades. But the long time PC MPP, Norm Miller, is not running and this is one of the two ridings in Ontario without a Liberal candidate. Bevan-Baker campaigned with Richter on Friday and said the party is getting a “huge response” even in traditional PC parts of the riding.

The leader of the PCs, Doug Ford, campaigned on Monday but, once again, the release from the PC Party only named the ridings Ford would be in; Etobicoke North, Don Valley West and Scarborough-Southwest. The Tories gave no times for Ford’s door knocking efforts and did not make Ford available for media questions. On Monday afternoon, the Don Valley North PC candidate Mark Saunders would not confirm if Ford would be campaigning in his riding while speaking with CP24.

The PCs posted a video clip from the debate. Anderson said the price of gas could be lower but the high prices might reduce driving and that might be a benefit to the environment. The one thing the video clip does not show is the empty chair for McCarthy who chose not to take part in the session.

The New Democrats gave Andrea Horwath the day off. Federal NDP Leader Jagmeet Singh stepped in to help with the campaign visiting ridings in Kingston, Ajax and Scarborough-Rouge Park. Horwath has completed her five-day COVID protocol and the NDP is “optimistic” she will be able to resume full campaigning on Tuesday.

The Liberals are now jumping on the “news of the day” to try and move the dial in their favour. On Saturday, after a number of car-jackings last week, Steven Del Duca said a Liberal government would set up an auto theft task force if elected. And on Monday Del Duca was in Ottawa to take a look at the damage from the storm that ripped through the region on Saturday.

Del Duca said he changed his schedule to go to eastern Ontario to assess the damage and learn more about the impact of the storm on the community. Del Duca asked “where is Doug Ford?” The Liberal Leader accused Ford of engaging in election gimmicks instead of visiting the communities hit so hard by the storm.

By mid-afternoon Monday the PCs added a stop to Ford’s agenda. He went to Uxbridge to gauge the extensive storm damage in that community calling it “devastating.” Ford said he would stay on top of the situation to get hydro back to communities. The stop blunted the Del Duca attack from earlier in the afternoon.

There are nine days of campaigning left and the polls suggest there has been little movement over the first three weeks of the campaign. Yes, the Liberal party is up in some polls and the NDP is up a bit in other polls but the one constant is the PCs have the lead and is tracking steady in all of the polls.