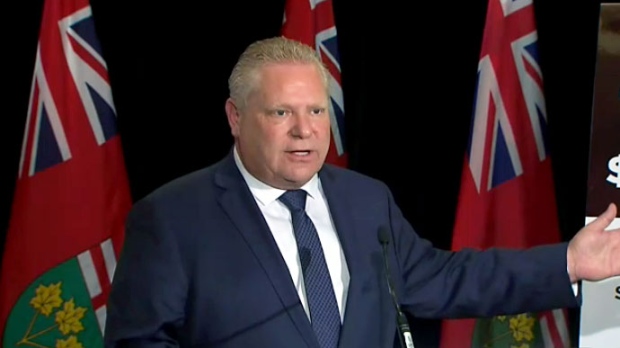 Doug Ford speaks to reporters at a news conference on April 12, 2018.

TORONTO -- Ontario's Progressive Conservatives have accused the governing Liberals of spending public funds on campaign-style events ahead of the spring election, and have asked Elections Ontario to investigate.

Campaign adviser Frank Klees told a news conference that the Liberals have taken "a scandalous approach ... to campaigning."

"Over the last two weeks, (Premier) Kathleen Wynne and the Liberal party have been shamelessly campaigning on the taxpayer's dime," he said. "Just today Wynne sent out four of her ministers across the GTA to make additional campaign stops."

The Tories said the Liberal party should foot the bill for those events, not taxpayers.

Elections Ontario declined to comment on whether it had received the complaint or if it would be investigating.

"She is doing government announcements of government initiatives," Matthews said. "That's quite appropriate the premier would be doing that."

A spokeswoman for Wynne later said in a written statement that the allegations are hypocritical.

"As the leader of the Opposition, (Doug) Ford relies on a large number of staff at the legislature who are paid by the taxpayer," Andrea Ernesaks wrote. "He has not fired those people or moved to pay for them, as a wealthy man, out of his own pocket."

Elections Ontario noted that if it does probe the Tory accusations and finds there's been a contravention of either the Election Act or the Election Finances Act, the matter would be referred to the Ministry of the Attorney General.

Ontario's election is set for June 7.