A new report by Ontario’s police watchdog body is calling for police services in the province to adopt new policies around the collection of DNA during investigations.

The report was released Tuesday by Independent Police Review Director Gerry McNeilly, who launched a review of police practices around DNA back in March following a complaint about the mass collection of DNA samples from a group of around 100 migrant workers as part of a 2013 OPP investigation into a violent sexual assault in Elgin County.

In that case, a migrant worker from Trinidad was eventually charged and sentenced to seven years in prison after he pleaded guilty to sexual assault with a weapon, forcible confinement and uttering death threats.

However as part of the investigation, police requested DNA samples from virtually every migrant worker in the vicinity – all of them men of colour, raising questions about police profiling and discriminatory practices.

“While I am satisfied that the OPP investigation was not motivated by racial prejudice, the nature and scope of the DNA canvass was overly broad and certainly had an impact on the migrant workers’ sense of vulnerability, lack of security and fairness,” McNeilly said in a statement Tuesday. “A more focused DNA canvass could have reduced concerns about racial profiling.”

The report found that the OPP failed to recognize the vulnerabilities of the migrant workers who were targeted and how that vulnerability affected their consent to give DNA samples. The OPP also failed to make sure that the decision to give or not give samples remained private, particularly from their employer, and didn’t properly explain the destruction process to those who were asked to give samples, the report found.

Going forward, the report recommends that OPP and other police services in the province develop a policy to govern how and when DNA sweeps are conducted. The report also recommends a model for a policy that is consistent with Canadian human rights regulations and sensitivity around vulnerable groups and perceptions of stereotyping.

However McNeilly ‘s report was met with a cold reception Tuesday by the advocacy group that filed the original complaint and felt the report didn’t go far enough.

“Right now we’re talking about migrant workers, but all vulnerable communities have to be concerned about infringement of their rights because of this support of DNA practices and DNA sweeps.”

Speaking at a news conference, McNeilly said the purpose of the report was not to identify misconduct among individuals, but to review systemic practices around DNA collection.

While McNeilly’s report found problems with the DNA collection practices in the OPP investigation, he noted that the suspect description and circumstances of the case gave investigators “ample grounds to believe that the perpetrator was one of the local migrant workers of colour.” He also noted that there was urgency to the work as well, with a number of the workers scheduled to soon leave the country at the time of the investigation.

The Office of the Independent Police Review Director (OIPRD) is responsible for receiving, managing and overseeing all public complaints about the police in Ontario. 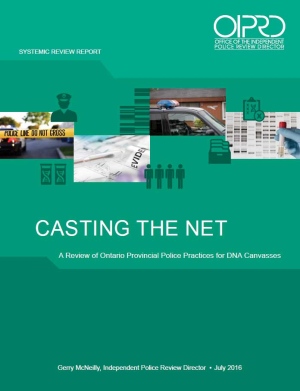